“I want more people to understand that women don’t have to be abused.” 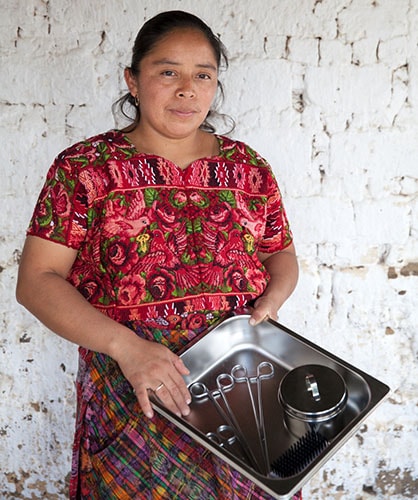 I grew up without a father. My mother was unable care for me because she had been so badly abused by my grandmother. So I raised my younger siblings on my own. I started working when I was seven years old. The woman I worked for beat me. I never reported her because I thought it was normal.

As a young woman I always felt unwell. I now think that my past traumas gave me physical symptoms. When I was twenty-two, I finally went to a doctor. At the clinic I learned about ACOTCHI, the Asociación Civil de Comadronas Tradicionales de Chimaltenango. It’s a group of midwives who offer professional training and teach people about women’s human rights.

A friend encouraged me to go to an ACOTCHI training in midwifery. I was terrified, because I had no formal education. But I’d always dreamed of studying to be a nurse. So I went to the training, and I’ve since been to many more.

Now I know so much about midwifery and nursing. My community turns to me when anyone is feeling sick. It gives me so much joy to use my medical skills and help people feel well again.

I’m very happy: I’m married and pregnant, and I love my work. Nonetheless, I sometimes struggle with my feelings about my past. But I try to draw on those emotions to motivate me, because I want to carry on living the best way I can.

In Guatemala, where I’m from, many women experience domestic violence. It’s often seen as normal. I used to think it was normal, too, when I was abused and humiliated as a child. Now I know that it’s not OK, and I’m passionate about spreading the word. In my own life, I won’t even accept yelling from my husband―let alone physical abuse.

Midwives can play a huge role in ending domestic abuse. We’re out in rural communities talking to families. If a woman in my community is being abused, I encourage her to stand up for herself and report it. I also talk to abusive husbands about women’s rights. I’ve seen men change their behavior, little by little. And I’ve heard the same from other midwives. They’ve seen their communities change for the better.

I want more people to understand that women don’t have to be abused, and that women and men are equal. We have the same capabilities. We are just as valuable. There’s so much machismo in Guatemala. People believe that only men are capable, but women are capable too. I want to live in a world where “women’s rights” are not just words, but a reality.

Gloria Marina Icu Puluc is a member of Asociación Civil de Comadronas Tradicionales de Chimaltenango (ACOTCHI) in Guatemala. A grantee partner of Global Fund for Women, ACOTCHI is a group of midwives that offers health and professional training programs to local women as a means to teach them about their rights. Today, Gloria uses her nursing and midwifery skills to provide health services and raise awareness about women’s rights in her community.