"Reaching out for help is petrifying in the moment, but it’s also the best decision you will ever make." 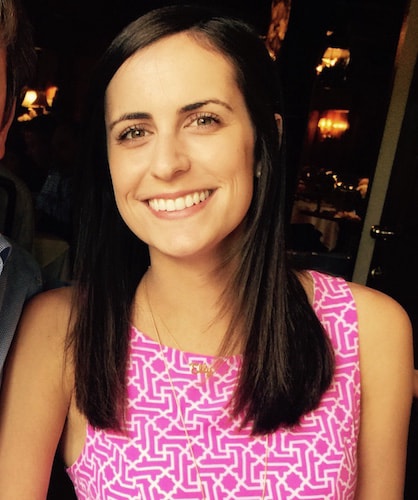 I grew up in Baton Rouge surrounded by loving family and incredible friends. I was a straight-A student, graduated salutatorian of my high school, and went on to attend the University of Virginia. In college, I continued to excel academically, volunteered in my free time, and served as president of my sorority. After graduation, I moved to New York City and took a job on Wall Street. That’s when my rapid decline began, as a “one-time” graduation diet continued into a downward spiral that I couldn’t escape.

For two years, I suffered in silence from debilitating anorexia. I starved myself and exercised to the point of exhaustion, all while working long days in the office and maintaining a busy social life.

I could sense that something was wrong—I didn’t feel like myself. The ambitious, joyful, and loving Elly was replaced with a skeleton who could think of nothing but food and exercise. Yet, I was terrified to talk to anyone about my suffering out of fear of judgment, of disappointing my loved ones, of no longer being perfect. It wasn’t until my closest friends and family reached out in support that I was even willing to admit how much I was suffering. They deserve all the credit in the world for making me feel comfortable enough to enter recovery.

Reaching out for help is petrifying in the moment, but it’s also the best decision you will ever make.

I can’t even begin to describe the relief that I felt when I stepped off the plane from NYC straight into the arms of my mom. I was 24 years old, but I felt like a child who just needed a hug.

I’ll admit there were some casualties. I had to put my career on hold, I lost touch with friends, and I left an exciting life in the big city. However, I didn’t lose the most important things: my life (luckily) and the love of the people who truly matter. The ones who love you will stand by your side—no questions asked—and you’ll be pleasantly surprised by some of the people who will step up to fight with you.

Unlike so many, I was lucky enough to make a full recovery. My mind is now free from the dark cloud of obsessive thoughts about food, exercise, dieting, calories, and body fat. I am able to experience joy and smile and laugh in ways that I never thought would be possible again. I feel comfortable with myself for the first time in years, and not just with my body, but with who I am as an individual on an emotional and spiritual level. My eating disorder and recovery are not something to be ashamed of; they will forever be a part of my journey. I still experience challenging moments, but I have gained a new sense of hope and resilience that I’ll never relinquish.

After my recovery, I was ready to move back to the East Coast, my favorite part of the country, but I found myself unable to return to New York, a city that would haunt me with painful memories. I ended up in Boston to begin an exciting job for an organization that I am incredibly passionate about. Instead of returning to a traditional finance role, I took a position at a non-profit that invests in underrepresented, marginalized communities. I had become part of a stigmatized group for the first time in my life (we all know how harshly the world can judge those with eating disorders), and I wanted to use my financial skills to help those whom society has abandoned. I also wanted to serve as an advocate for those who are paralyzed by fear and unable to speak for themselves. Having the “perfect” life and a career in finance was Option A. Now, I’m rocking my Option B: raising awareness of eating disorders and mental illness.

In light of recent headlines, I was compelled to share my story of survival, and specifically address the prevalence of suicide among those who suffer from eating disorders. I hope that it provides anyone suffering—whether from eating disorders, depression, or anxiety—with the comfort of knowing that they are not alone. More importantly, I hope that it inspires them to ask for help.

Publishing my journal entry below is the scariest thing I’ve ever done, but I’m paying it forward, one word at a time.

Last week, the world was rocked by news of the suicides of Anthony Bourdain and Kate Spade. The public was shocked that two individuals so successful, wealthy, and optically “happy” could experience such unimaginable suffering. Frankly, I am not shocked. I am not shocked because I was in the same exact place a little over a year ago.

I was living a seemingly successful and glamorous life in New York City. I had a prestigious job as an investment analyst at a big Wall Street bank. I was financially successful and lived in a quaint NYC apartment in a fabulous neighborhood. I wore trendy clothes and had a buzzing social life filled with exciting visits to restaurants, bars, and parties. I had a wonderful family that visited me often and a boyfriend who was as driven and successful as I was.

From the outside, my life was perfect. On the inside, I was suffering silently from an illness so painful and severe that it cannot be articulated.

I considered suicide many times during my years in New York. There is no way to describe the inescapable despondency that accompanies a severe eating disorder. You feel so trapped by your own mind, by the eating and exercise “rules,” by the irrational thoughts and the self-hate. You convince yourself that you’ll be happier if you lose five more pounds, but you cannot escape the hopeless feeling that the painful cycle will never end. For some, unfortunately, it never does. Anorexia is a deadly mental disorder—and one out of five anorexic deaths are from suicide.

I was right there, ready to take my own life just to put myself out of my misery. On a regular basis, I was tormented all night by anxious thoughts about food and exercising, ultimately succumbing to a feeling of pure despondency. On more than one occasion in the dead of New York winter, I took the subway to the Brooklyn Bridge in the middle of the night. I would walk to the center of the bridge, shivering from the wind, and peer over the edge into the water. I would envision how I would climb the barricade and jump. Thankfully, my paralyzing fear of heights made me chicken out every time and return to my apartment to shiver all night from cold and fear.

I would wake up at the crack of dawn the next morning, undergo my daily brutal exercise routine, and head to work as if nothing happened. I would smile and chat with my co-workers, sit in meetings all day, and construct perfect presentations and Excel spreadsheets. On the outside, I was doing everything exactly as I was supposed to. I was an expert at “putting on the face” and pretending that everything was okay at work, to my friends, to my family. The memory of the bridge would fade into the background until another sleepless night of anxiety and sadness would force me out of bed and into the frigid air once again.

It was my family’s love—and His—that held me back every time.

This excruciating cycle went on for months. I came very close to jumping many times. The only thing that stopped me was the thought of my loved ones at home in Baton Rouge. I would picture my family—my loving parents, my lively sister, and my goofy brother—sitting around our house on Christmas morning. I couldn’t bear the thought of abandoning them, or the inevitable guilt that they would feel for not being able to help me. As I stood there shivering, I was often reminded of something that my mother had said me to when she sensed I was struggling: “God gives his hardest battles to his toughest soldiers. He wouldn’t give you a cross that you cannot bear.” It was my family’s love—and His—that held me back every time.

People claim that suicide is the ultimate act of selfishness. I hope my story helps to shed light on the fact that suicide is not selfish—it is an act of pure desperation, a symptom of an illness that is crippling beyond all comprehension. All capacity for rational thought disappears and the dark, despondent feelings create the ultimate tunnel vision. Your mind is consumed with desperate attempts to find relief from the anxiety that prevents you from experiencing any joy. The only reprieve comes with sleep, but even that is short-lived, because when the sun rises, you are forced to face the reality of your existence. In the minds of those who truly suffer, there is no way out but to jump.

I resent the way that society judges the mentally ill. It is a disease, a chemical imbalance just like cancer or diabetes. Not to mention that eating disorders are genetic, a fact that most people seem to be oblivious to. Mental health issues can happen to anyone—they do not discriminate based on race, gender, religion, socioeconomic status, or age. I was doing everything right—impeccable grades, prestigious college, great job, fabulous city and social life—but I was hit by an unexpected tidal wave. To the world I was perfect, yet I was drowning on the inside.

I’ll carry those memories of shivering on the Brooklyn Bridge with me forever. Even today, when I see that bridge in movies and TV shows, a shiver runs down my spine and I often have to look away. To me, it’s not an iconic landmark, but a symbol of the torture I endured.

My survival is entirely due to the unconditional love and dedication of my closest friends and family.

Looking back one year later, I am lucky to be alive. Many are not so fortunate. My survival is entirely due to the unconditional love and dedication of my closest friends and family. They pulled me out of unimaginable darkness and brought me back to life. Never again will I take for granted this amazing life that I have. Now it’s time to go out, bask in the Boston sunshine, and thank God for every moment that I am alive.