“Creating something new and sharing my grief and loss seemed to patch up some of what was broken in me.” 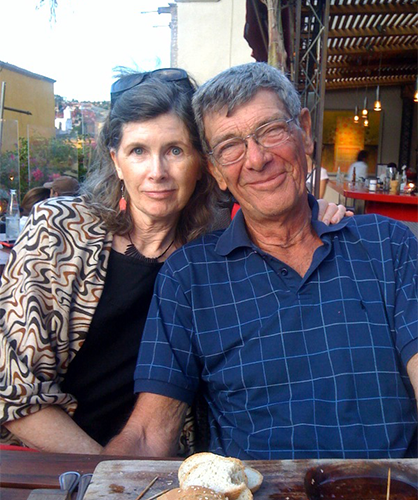 My husband died after seven years of a neurological illness that had no treatment or cure. Those years were hard, but we were together. After his death I was alone for the first time in forty years. As an artist, I had been able to cobble together time to work on my art in my studio through most of my husband’s illness. After he died, I lacked the concentration necessary to paint the large oil on canvas work I had been doing for years. I resigned myself to that reality: no art for at least twelve months. That had been my experience when my brother died a few years earlier.

And yet, being so alone and bereft with grief, I couldn’t help but look longingly into my studio, where I had spent so many fulfilling hours. I tried a few paintings; awful. I stopped.

I was writing in my journal fairly regularly while I wasn’t bingeing on Netflix series. Several years ago I did a children’s book, primarily for my grandchildren, though it was published. As part of that work, I had become a great fan of Beatrix Potter, reading biographies and learning as much as I could about her work. She had suffered a great loss in her life and continued painting. I eventually sat down in my studio and took out my old watercolor paints and brushes and began to do a few sketchy painting studies based on events in my journals. It was often painful, and I couldn’t do more than one a day. As they accumulated, I began to match them with text from my journals.

The act of creating something, anything, was soothing and filled some of the empty places in my heart.

But the act of creating something, anything, was soothing and filled some of the empty places in my heart. I didn’t show the paintings to anyone until an artist friend came for a visit. After deflecting her questions, as I did with my other friends and family, I admitted I had been doing “some stuff.” I led her into the studio and she went through the paintings. “You need to continue this and make a book,” she said flatly. “And hire a good designer to put it together.” “But they aren’t finished; they are only quick studies,” I answered.

As I looked at the little paintings I felt their power, their sense of immediacy. Raw, messy, and so like how I felt each morning. They did become a book, and I heard from others who had suffered losses that it affirmed some of their feelings. Like a children’s book for adults, it is largely pictures and requires no great amount of concentration. Creating something new and sharing my grief and loss seemed to patch up some of what was broken in me.

Katharine Smith-Warren is an artist and writer in Denver Colorado. She has exhibited her art regionally and has published two illustrated books, Is That How It Will Be? a journal of the first year living alone after her husband died. In 2012 she published a children's book, Georgie's Great Adventure.