“I have found and am embracing my Option B, and I believe that everyone else can, too.” 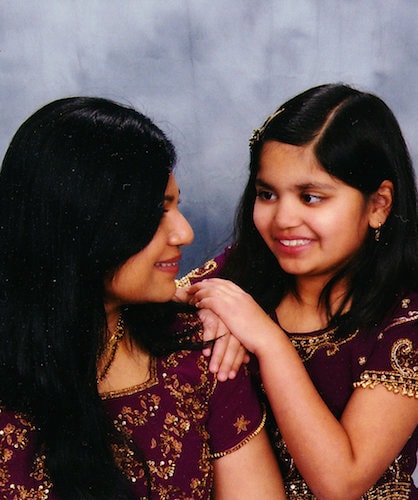 I lost my mother, Parijat Ghatak, on May 13, 2015. She had been in and out of the hospital with breast cancer for some time, and even though I was devastated by her passing, I was relieved that she was no longer in pain.

I still remember that day like it was yesterday.

It was a Wednesday, and my mother's sister was over with her husband and three-month-old daughter. They were there to help out and to celebrate my 13th birthday. We had all gone to visit my mother the day before and I was excited to see her again after school. But my father called as I was eating breakfast and I was asked to stay home until he returned. I was worried that I would miss my bus to school. No one had told me anything, but in my heart I knew that it had something to do with my mother. A few minutes later, my father arrived, but my uncle came back as well, which confused me because my father was supposed to drop him off to catch the bus into New York. They all sat down with me and I saw that my aunt was in tears.

“Are we still going to see Mama today?” I asked them.

They shook their heads and my father said, “Magi, the hospital called. Mama passed away this morning.”

The news didn’t register at first. My father asked me if I wanted to stay home. I said no and rushed out the door to catch my school bus. As I walked to the bus stop, I checked my phone and received a text from the son of one of my mom's friends who had heard about what happened. He wrote that he was sorry for my loss and wished me a belated happy birthday. Only then did I realize that my mom was really gone.

A group of my closest friends walked me to my counselor's office and it felt like everyone at school made an effort to comfort me. It was nice.

I got on the bus and scrolled through my phone, silently crying as I looked at all the pictures I had of my mom and me together. I walked into school sad, but with my head held high. My friend who had a locker next to mine knew that something was wrong, so I told him that my mom had passed away that morning. My science teacher overheard, along with a few other friends, and she called my counselor. A group of my closest friends walked me to my counselor's office and it felt like everyone at school made an effort to comfort me. It was nice. My best friend, whom I’ve known since third grade, made a big card for the whole school to sign at lunch, to cheer me up. It eventually became full, so they made an even bigger card to pass around. Some kids wrote meaningful quotes, others shared how I was such a wonderful and inspirational person, and some even drew pictures. To this day, I read those cards whenever I feel down.

While the loss of my mother was a heartbreaking experience, it has helped me become a better and stronger person.

After she passed away, I decided to continue helping others and to honor her memory. A month after her passing, my school held a Relay for Life walk to raise money for the American Cancer Society (ACS). I felt honored when I was asked to hold my mother's picture during the survivor's walk, as well as to speak about her and her battle with breast cancer.

I also remembered that my mother was part of a team for the Making Strides Against Breast Cancer walk that the ACS holds every October, and I decided to take over her team. With the help and generous donations of my family and friends, we have been able to raise more than $6,000 for the cause over the past three years.

In addition, I’ve been a Girl Scout for eight years, which involves undertaking Silver and Gold Award projects that revolve around a topic close to our heart. Mine is grief. For my Silver Award project, “Establishing a New Children's Resource Center in the Adult Oncology Department at Saint Peter's University Hospital,” I turned a hospital waiting room into a resource center for children of cancer patients. My mom was treated there, so my younger brother and I spent a lot of time in that waiting room with our family. It was a place they called “The Healing Garden,” and it was designed to be a stress-free and nurturing environment. Unfortunately, it lacked materials that were suitable for children during such a difficult time, so I decided to take action to turn the space into a more positive environment. With the addition of new shelves and items such as books and toys, the waiting room is now a better and happier place for kids to be. I was presented with a “Kids Who Make Magic Award” by Magic 98.3, a local radio station, for my effort.

More recently, I have been working on my Gold Award project for over a year. Called “Embracing Your ‘Option B,’” it’s an interactive grief program for children coping with loss that is based upon Sheryl’s book, Option B. Following my mother's passing, her nurse at Saint Peter's University Hospital recommended that my brother and I attend a four-day bereavement day camp called Camp Clover. Camp Clover introduced my family to Good Grief, a grief counseling center that my family and I have attended since September 2015, and Good Grief introduced me to Option B. I spent two years as a camper at Camp Clover, and last summer I became a junior camp counselor there. This year, I had the pleasure of becoming a camp counselor and, with help from the camp's volunteer coordinator, I was able to implement my “Embracing Your ‘Option B’” program. The children had an amazing time sharing their stories and doing activities pulled straight from Sheryl’s book, including joy journals and motivational bracelets similar to the “YGT” necklace that Sheryl made for her friend who was battling cancer. Last year, Good Grief’s CEO, Joe Primo, and I did a Facebook Live with a few other Good Grief participants for National Children's Grief Awareness Day, and I am looking forward to doing another one this year.

I have faced many obstacles in my life, but despite them all, I am always inspired to be myself and help others, while also discovering joy in life.

After losing my mother in May 2015, I was diagnosed with Crohn's disease in October 2016. I have faced many obstacles in my life, but despite them all, I am always inspired to be myself and help others, while also discovering joy in life. I have found and am embracing my Option B, and I believe that everyone else can, too.