“Emily’s Entourage has allowed me to change paralyzing fear into something infinitely more powerful—hope and impact.” 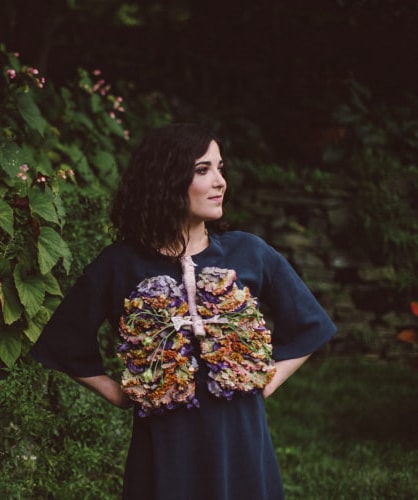 As a precocious, bright-eyed kid, my list of career aspirations ran the gamut. I dreamed of being a talk show host, FBI agent, even a constitutional lawyer.

Never would I have expected to find myself at the ripe age of thirty-two in the fight of my life against the ultimate hijacker, a savage beast called cystic fibrosis.

Cystic fibrosis is a fatal genetic disease that affects the lungs and digestive system. Thick mucus builds up in the lungs, leading to life-threatening infections. The crazy thing about CF is that it is an invisible monster. Looking at me, you would never guess that I have only 35 percent lung function and I am dangling on the verge of end-stage disease, where the only treatment option is a lung transplant. Each day, I spend four hours on breathing treatments, take more than thirty pills, and do five insulin shots—and that is when I am healthy. When sick, I go into the hospital for weeks-long courses of IV antibiotics.

Over the past few years, there have been game-changing advances in CF treatment. New drugs have come to market that address the root cause of CF rather than just the symptoms. Their effects have defied our wildest dreams, taking people off transplant lists, letting them run marathons, have babies, dream of a future they can actually believe in.

We are waiting with bated and fading breath, orphans of this orphan disease, sinking in the sea of CF as our disease-mates sail off to safety.

Unfortunately, I belong to a subset of the CF population with a rare form of the disease caused by a nonsense mutation. None of the breakthroughs have been for us. We are waiting with bated and fading breath, orphans of this orphan disease, sinking in the sea of CF as our disease-mates sail off to safety. Our hearts are happy for them, but envious too.

In 2011, as these new drugs were coming to market, I found myself in a precarious place. My disease was rapidly progressing. My lung function hit an all-time low. I was diagnosed with CF-related diabetes.

I was running out of treatment options and it was terrifying.

I threw myself into the research and what I found was disheartening. The deeper I dug, the bleaker the drug development landscape looked for those of us with nonsense mutations. It became clear that at the current rate, science would not deliver a breakthrough in time to save my life or the lives of others like me.

My family, friends, and I decided we could not just sit back and let nature take its course. Instead, we chose action.

We realized that what stood between us and breakthroughs was not only science but leadership, coordination, and the humanity that only a patient and family can infuse into the system. In response, we formed Emily’s Entourage, a nonprofit organization to fast-track research and drug development for nonsense mutations of CF.

What we lacked in fundraising experience and scientific knowledge we made up for in passion, laser focus, and tireless work. We have raised more than $2.5 million and built a team of world-class scientists, philanthropic leaders, and volunteers. We are creating cell models to spur drug discovery and investing in cutting-edge technologies. We are paving the way to major scientific advances, and I firmly believe that we are on the cusp of transformative progress.

But what I am most grateful for is that Emily’s Entourage has allowed me to change paralyzing fear into something infinitely more powerful—hope and impact.

To think that one person, one family, one community could throw the stone that creates the ripples that become the tidal waves that change the course of medicine—that is the power of hope. That is the power of communities that refuse to accept the status quo.

It is desperation that sparks groundbreaking, silo-shattering innovation. So we are making the most of it, harnessing desperation—and hope—to drive audacious innovation.

In a beautiful twist of fate, our quest for the cure has turned out to be curative itself.

The community that has rallied behind this quest has been a beautiful—and unexpected—outcome. There is this thread of humanity that binds us together and mobilizes us to action, and it has been exquisite to witness firsthand.

While running a foundation to accelerate research on my fatal disease was not top of my list of childhood dreams, I choose to embrace the path and vigorously race down it, to chase after a breakthrough and pursue disruptive change in medicine.

I race—the crunch of time my propelling fuel. And I hope—hope for a future where we can all breathe easier.

Emily Kramer-Golinkoff is Co-Founder of Emily's Entourage, a 501(c)3 that accelerates research for new treatments and a cure for rare nonsense mutations of Cystic Fibrosis, a fatal illness afflicting Emily and many others. Named a White House Champion of Change for Precision Medicine, Emily’s Entourage has raised over $2.5 million dollars since 2011 and led worldwide efforts to drive high-impact research and groundbreaking collaboration. For more information, visit EmilysEntourage.org or @EmilysEntourage on Facebook, Instagram or Twitter.

Emily has a master’s degree in bioethics and certification in clinical ethics mediation from the University of Pennsylvania, where she also completed her undergraduate degree. She is an internationally recognized patient advocate and speaker, giving talks at The White House, TEDx, University of Pennsylvania’s Annenberg School for Communication graduation, and Stanford University’s Medicine X. Her story and the work of Emily's Entourage have been featured on CNN.com, People.com, Time.com, Yahoo Health, AOL, CBS's The Doctors, and more.