“Fathering takes many forms and comes in many different shapes—from teachers and coaches to friends and mentors.” 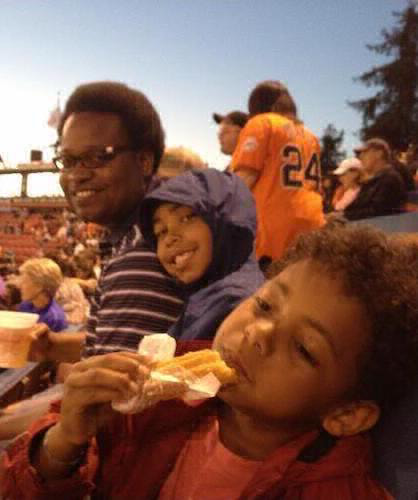 Years ago, before I had kids and a wife, I used to denigrate Father’s Day. I’d never had a father in my life, and I was proud of it.

I loved Father’s Day because it cost me nothing. I was not required to spend my money or my precious time on a man who claimed to be my father. I did not have to act as if I was appreciative of a man who had guided me through the most tumultuous years of my life. To me, Father’s Day was almost as nice as Thanksgiving. I could eat and be merry and do nothing for anyone.

So, I rejoiced in celebrating because...I had no father. I had no one who looked like me or spoke like me. I had no one who asked me to think about my future and how I planned to support my family. No one to teach me about being a man and the burden of caring for those in your family.

I was celebrating an absentee figure, and I was elated. My girlfriend would go visit her father, and I would stay home. Was her father a father to me? Yes, but it was not the same. I had met him late in life after I was a fully formed adult, and I was no longer easily influenced to act in a different manner. Yet, despite all of my celebration and conviction that I was alone, I was not.

Today, I’m reminded of all of those fathers that supported me. I’m reminded of Mr. Courtright, who gave me a job between high school and college when I could not find any work. I’m reminded of Mr. Hopper, who was my baseball coach when I was 12 and later sold me my first car at 19, because he knew I was not able to afford one. I’m reminded of Mr. Perry, who had me over for dinner, shared stories about the choices he made that led him to where he was in life, and explained why being a lawyer might be a bad idea. “Steve,” he would say, “Go make money and hire a lawyer.”

Despite all of my celebration and conviction that I was alone, I was not.

I could not be more thankful for all the father figures in my life who have played such a pivotal role in shaping me. On Father’s Day, I now celebrate Mr. Brust and Mr. Smith, who treated me to dinner after basketball games and never mentioned the cost, implicitly understanding that I could not afford to pay for my meal. I celebrate Ferd Mariani, who coached me for many years and asked, “What do you want to be?” after he got on my ass about pushing myself in basketball and life. I celebrate my track coach, Bateman, who I secretly think was trying to kill me with his strenuous workouts, chanting, “Don’t be afraid to win” when I was running during practice because he knew I could push myself harder. I celebrate Mr. Grainer, a teacher that I never had, who pulled me into his class one day to listen to an African American speaker because he thought it was important that I heard a message from someone who looked like me. I celebrate Bruce Alder, the administrator who allowed me to play basketball with him and the rest of the older leaders during lunch at the Home (short for Northern Nevada Children’s Home) where I lived. I was the only young boy allowed to join them and, although I was bad, they were willing to help coach me along the way. I celebrate my Uncle Joe, who looks nothing like me, but showed me much love by buying me my letterman’s jacket in high school when he knew that I could never afford to do so. I celebrate Mr. Madsen, who demonstrated what fatherhood looks like in his everyday work and unknowingly mentored me through his actions. I celebrate Dick Mills and Larry Hatfield for allowing me to see how daughters love their fathers. I celebrate Lesley Murphy, a man who models that being a father is a lifelong job that is passed on to the next generation. Finally, I celebrate Ray, who demonstrated to me what it looks like “When a Man Loves a Woman” (following the Percy Sledge song) in real life.

Ultimately, my experience underscores the fact that fatherhood is not necessarily biological. Rather, fathering takes many forms and comes in many different shapes—from teachers and coaches to friends and mentors. My celebration of not having a father actually equates to an expression of gratitude to my friends for allowing me to borrow theirs. I was granted the gift of my friends and was rewarded with mentorships by their fathers. I guess I was simply celebrating Father’s Day in my own distinct way.

Today, I celebrate Father’s Day by trying to pay back what my father figures gave me and follow their lead.

This Father’s Day, let’s celebrate all the men out there who father boys, whether their own or those of other men!