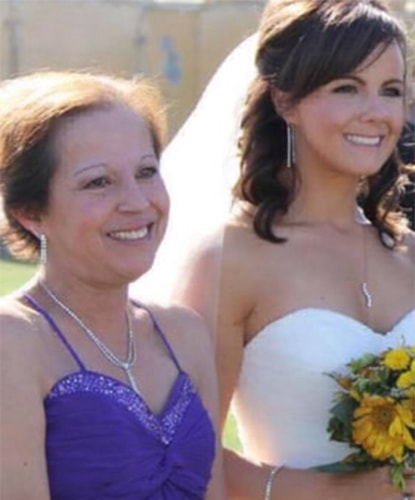 Tough as nails and full of grit—words I often use to describe my 4’10” Nicaraguan mother. She proved this description to be most true in 2008 when she left work at the hospital and tripped over a sprinkler head, catapulting her into an empty street and causing her entire left knee cap to shatter. You and I would have run right back in for urgent treatment. Not my mother. My mother drove herself twenty miles to the store, her knee cap bleeding through her meticulously bleached white scrubs, to buy an ACE bandage and hydrogen peroxide. At home, she cleaned and wrapped the wound herself and reported to work at 6:00 a.m. the next day.

There wasn’t anything my mother—a registered nurse for thirty-nine years and a single mother of three—couldn’t do, and her acts of strength and bravery weren’t foreign to my brothers and me. Even after her 2008 knee injury, a handful of surgeries, and intermittent falls at work or in crowded airports, my mother continued to work as a nurse and nursing clinical instructor until her legs ultimately forbade her to continue walking the hospital halls she knew and loved.

She was, after all, tough as nails, and invincible.

When cleared for knee replacement surgery, my mother’s longstanding aortic stenosis had to be evaluated. She had been entirely asymptomatic for at least twenty years. Doctors informed us she would eventually, in maybe ten years’ time, need heart surgery. Ten years was so far away! We would cross that bridge when we got there. The doctor’s email review of the testing even stated in plain text: “Strong heart.” This was no surprise. She was, after all, tough as nails, and invincible.

My mother underwent uneventful left knee surgery on December 2, 2016. She went home. She engaged in physical therapy. By January 2017, something was not right. She was weak, fatigued, swollen, and confused at times, and her incision wound had unforgivingly split open only to become a black, infected eyesore.

My brother Bobby reminded me almost daily, “Don’t worry, Val; she’s tougher than all of us.”

My brothers and I struggled to accept that something could knock our hero down when her symptoms led to a nineteen day hospitalization for low sodium and potassium levels, in addition to pneumonia—all of which my brothers and I were told stemmed from my mother’s aortic stenosis. My brother Bobby reminded me almost daily, “Don’t worry, Val; she’s tougher than all of us.” True to form, my mother defeated every ailment and roadblock, including several days in the ICU. She made it home.

It was five short days before she was again hospitalized for additional intestinal and wound infections, recurring pneumonia, and advancing pulmonary disease.

On March 12, 2017, Bobby flew in from Michigan so we could inspect potential rehabilitation facilities that would be my mother’s final stop before coming home to us. Bobby attempted to prepare her homemade chicken soup. He said it would never be Mom’s, but she’d be proud he tried. My mother would never taste the soup.

That day, my mother turned septic and required intubation. We were told the sepsis was fatal, but my mother had other plans. She beat sepsis in a matter of days, shocking ICU doctors and reminding my brothers and me why she could never be underestimated, why she was the strongest person we would ever know, and why she was our champion.

My mother passed away from heart and lung failure exactly two weeks later, on March 26, 2017, at 4:29 a.m. Her timing was in character. She was the epitome of an early bird and started all her days at 4:30 a.m.

Even as she passed, she did things her way, on her own accord.

Months later, my two brothers and I are experiencing the emotions we read and are told we will feel: denial, shock, guilt, anger, searching. We have days when we laugh at all of my mother’s quirks, days when we remind ourselves of her sharp truisms, and times we feel at peace that she is in a better place. Still, there are days I question every moment leading up to and following her surgery. What could I have done to stop this? What sign did I not see? I should have rushed her to the emergency room sooner. I did this! But as Option B tells us, death is not personal. I did not do this. And that is something I need to repeat to myself on a daily basis—at least for now.

On the other hand, there are times I dial my mother’s phone number out of habit and I simply cannot fully swallow the concept that she is gone. I assume she is at home watching the Food Network (which she erroneously called “Food Court,” no matter how many times we corrected her) while working on a word search. Then, I have to stop and remind myself: No. She is not home. You cannot call her. She is really gone. And she is not coming back. Ever. In these moments, the hardest thing to wrap my head around is the permanence of it—the idea that I will turn forty soon, and then fifty, and even though decades will pass, my mother will not be here. In this life, there is no end to her absence.

To understand the wave of vastly different emotional states I experience, I often have to remind myself: I am in the thick of grieving my mother’s death.

I am tethered to my mother. I am her youngest. Her only girl. Two best friends. She took care of me and I took care of her. She taught me how to cook arroz con pollo, chicken so tender it cannot keep from falling off the bone; how to enjoy the simple things in life like sitting in the sun with a glass of wine and good conversation; and to work hard because “it’s better to be physically tired than mentally tired,” to name a few. She taught me how to cope. My father passed away in 2001 and for years I feared I’d end up bipolar or depressed like him based on my moods and overwhelming worry. This fear became more intense when I was diagnosed with Generalized Anxiety Disorder in 2007. My mother, the most constant, reassuring presence in my life, cured my fear. She’d often say, “I taught you to get up and keep moving” and “When you feel down, you keep yourself busy.” And she’d remind me: “Don’t worry—I taught you coping skills.” And she did. It is today, in the thick of grieving my mother’s death, that I am applying the coping skills she taught me, hardly allowing a waking minute to pass when I am not working, cleaning, cooking, exercising, or surrounded by my husband and friends. As in all aspects of my life, mama knows best. Her instructions for how to cope are keeping me afloat and even allowing me to find some joy in the darkest days I have ever lived. Even so, when I stop my carousel routine of working, cooking, cleaning, and exercising, and the world is still, my heart yearns and aches for her in grief.

I, however, will be okay. I am my mother’s daughter. I, too, am tough as nails. I, too, have a strong heart.