“What was important to me 15 years ago has changed. Now I want to help other people through their own challenge or crisis.” 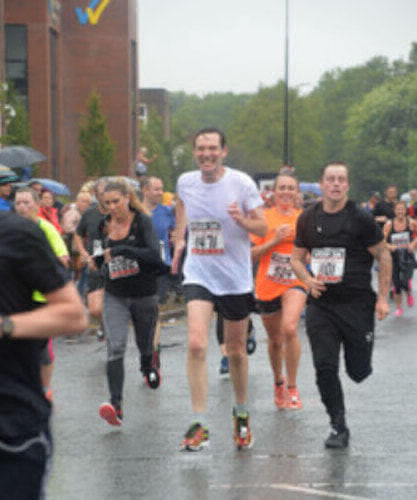 Being grateful for a windy day so that I could watch the clouds go by was not part of my life plan. Like us all, I’d had my dreams and ambitions, hopes and aspirations, but in 2004, none of them seemed to matter anymore.

Eighteen months before, my wife and I had decided that she would go back to work and I would stay at home with our girls, aged 4 and 18 months. Our younger daughter needed a lot of medical attention and we thought it was important that there was someone there to make sure she was safe and to take her to her medical appointments. So, I left my job working for the local Social Services Department and at the beginning of September 2002, I became a very proud, full-time dad.

However, things didn’t go as planned. I soon started to show some strange signs that all was not well. Eventually, late one night, I felt a painful pressure in my legs and we called the emergency doctor. The doctor was concerned, but was unable to diagnose anything alarming. Nevertheless, I woke up the next morning barely able to go to the bathroom before collapsing back onto the bed, weak with unimaginable exhaustion.

It took several months after that for me to be diagnosed with Chronic Fatigue Syndrome, or M.E. By then, I was bed bound. Too weak and exhausted to even read or listen to the radio, my only interest was watching the clouds from my bed. By that stage, I was utterly depressed and, alone and lonely, I wept buckets.

However, a turning point had arrived. Fed up with my situation, I snapped out of my self-pity and asked myself a question that changed my life: “What can I do about it?”

I felt a sudden release. I could do something! I felt confident and empowered as I wrote a list of small changes I could make to improve my situation. One of those things—contacting a friend of a friend who also had M.E.—eventually got me into a treatment program that gave me the boost I needed.

I snapped out of my self-pity and asked myself a question that changed my life: “What can I do about it?”

Almost four years to the day when I was first ill, I thought I had fully recovered. But little did I know of the relapses, setbacks, pitfalls, and mental traps awaiting me further down the line. Not knowing what had caused my illness in the first place, I was oblivious to the stress in my life that led to a sudden re-emergence of the illness in 2012.

At least this time, I knew how to manage the M.E. Thankfully, I didn’t end up bed bound, although I did need my wheelchair again, since I was often too weak to walk very far. In the subsequent months and years, there were more ups and downs than on any rollercoaster. I thought so many times that I was nearly there, that recovery was just around the next corner. I was doing all the right things, or so I thought, but still the relapse and remission continued.

By 2014, after another severe relapse, I’d become convinced that stress was the root cause of my illness. As a result, I resolved to make a practice of the only thing I knew that could help me “empty my bucket” of all the stress—much of it self-imposed—that had built up over the years. I started to meditate.

Am I determined to live my life to the fullest? You bet your boots I am.

When recovering from 2004 to 2008, I experienced so much variability in my condition that I just expected this would continue to be the case. In November 2014 I once again told my family I was too unwell to cook or walk the dog. From that point on, I strangely and miraculously experienced steady progress over the following two and a half years with no hint of relapse. The meditation was working literal wonders.

This time, my recovery was almost complete when I decided to get more active, and in April 2017, I started running. Less than six months later, with friends and family cheering me on from the sidelines, with pride and euphoria, I completed my first 10K race in Wigan, England.

Am I well again? Who knows. Could the illness strike again? Of course it could. Am I determined to live my life to the fullest with that knowledge? You bet your boots I am.

And so, as I have started to establish a new identity, I realize that what was important to me 15 years ago has changed. Now I want to help other people through their own challenge or crisis. I qualified as a personal resilience coach, blog about resilience, and run a resilience and well-being class. During those long periods of illness, I researched the psychology around resilience, and it was a conversation with my daughter about growth mindset theory that led to perhaps my proudest moment.

As a coach and blogger, Pete Reece has a professional interest in resilience and has been researching how people survive and thrive through tough times for nearly 15 years. Pete hopes he can use his experience to help other community members. Visit his blog at www.remarkableresilience.blog