“I saw that life could be ok, even happy, without Frank.” 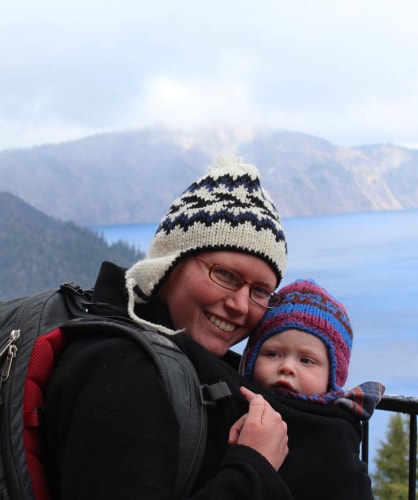 It was the third time Frank had been to the medical imaging office in a week. We had gone together on Monday for the prenatal scan. When the technician said our child would be a girl, Frank looked at me and said, “Sofia.” But Frank was already feeling off.

On Tuesday, Frank’s right leg started to swell. His doctor sent him to get the leg checked for clots, but the scan turned up nothing. Now it was Thursday, and his other leg was swollen. As I left the midwife’s office after a checkup, Frank called to ask me to take him to the imaging center. His legs were too swollen for him to drive.

We were just around the corner from the office where we had learned that I was carrying a healthy girl, but this visit was very different. After a couple of minutes, the technician left to get the doctor.

“You need to go straight to the emergency room,” the doctor said. Frank had severe blood clots in his thigh and abdomen.

At the ER, a CT scan revealed that Frank likely had lymphoma. The diagnosis was confirmed by biopsy, but we were reassured that 90 percent of patients with his diagnosis were alive after three years.

“I have a daughter coming in January,” Frank would say. “I have to get better by then.”

The next seven months became a blur of temporary improvements and crushing setbacks. Frank’s doctors never seemed to know exactly what was going on. I drove Frank to the hospital for an in-patient chemotherapy treatment hours before going into labor. Sofia was born at home, and Frank got out of the hospital for just long enough to be there. Then an adverse reaction to the chemotherapy kept him hospitalized until she was nearly two weeks old. When he came home, life was a blur of appointments and medications.

On March 3, 2016, we were looking forward to the first day off from appointments in more than a week. As we woke up, Frank asked me to bring Sofia into bed and put her between us, so we could cuddle and watch her wiggle. When we were ready to get up for breakfast, Frank realized he was too weak to stand.

My dad came over to help Frank get to the car so we could go to the hospital. We didn’t discover that Frank had an infection until late afternoon, and by then he was starting to lose consciousness. That night, his blood pressure dropped and he went to the ICU. On Saturday the doctor told me it was unlikely that he would recover, and we removed life support. He died that Saturday night, with Sofia in his arms.

My sister stayed with me immediately after Frank’s death, preparing meals and watching Sofia while I showered. I focused all my attention on fulfilling Frank’s final wish, that his skeleton be donated to an art school. By Tuesday, I had put into place everything needed to preserve Frank’s skeleton at the Art Students League of New York.

Then I sank into numbness. I fed and bathed Sofia, I fed and bathed myself. A GoFundMe campaign and Social Security benefits met my immediate financial needs, so my days were spent waiting for dinnertime, when different friends ate with me.

Frank’s family and I held a memorial that July, in the same picnic area where we had gotten married three years earlier. My feelings about the memorial ranged from ambivalence to dread. Unexpectedly, my mood slowly shifted in the weeks afterward. I saw that life could be okay, even happy, without Frank.

I spent a long weekend with friends on their cattle ranch near the coast. I’d been thinking about taking a clamming workshop for years, but Frank’s lack of enthusiasm meant something else always took precedence. So I signed up and brought back enough clams for dinner.

Two weeks later I went clamming on my own. It was a gray, rainy day, typical of the Oregon coast. I nursed Sofia in her carrier while wading through the bay. “Oh, that’s a baby!” the Fish and Wildlife officer exclaimed as she checked my catch. “That’s right,” I thought. “I am a badass mama.”

I started to focus on doing things I enjoy. I visited a friend in Canada and took short trips within Oregon. I went mushroom hunting. On the anniversary of Frank’s death, I went from brunch to happy hour to dinner with friends and rededicated myself to building strong social connections.

Frank and I learned that his cancer was terminal about three weeks before he died. At the time, we thought he still had at least six more months, maybe a year. He was adamant that he wanted me to be happy. In the weeks and months immediately after his death, that was harder than arranging to donate his skeleton. But now I realize that creating a happy life for myself and our daughter is an important part of honoring Frank’s wishes.

Learn more about Emily at emilyomier.com and join a widows’ mastermind here.