“I was right, but what I didn’t know was that God was sending me a message that was going to last forever.” 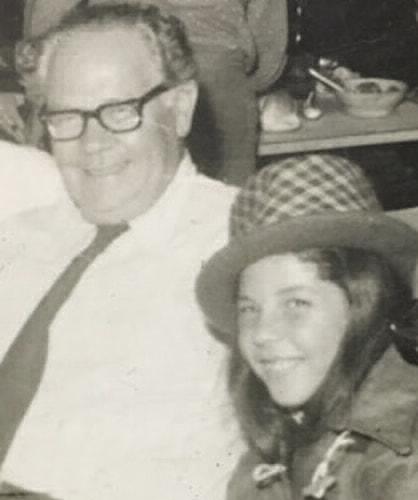 It was January 1, 1981, and I was at the Jorge Chavez International Airport in Lima, Peru, saying goodbye to my daddy. When the flight hostess called the passengers, I gave him a hug and a kiss and started crying like a baby. My daddy kissed me and his eyes filled with tears. Why were we crying? We were going to see each other in two months.

For a 16-year-old girl, the most important moments are usually those spent with her friends. I loved my parents and I loved my sister, but the circumstances at the time didn’t let us live together. My sister came to America to continue her studies at a university and our mom came with her to make sure she was safe. I missed them like crazy, but I had my friends, who became my family.

My daddy stayed in Peru with me and I had no doubt he was the best father on the planet. If I could have asked for a father, I would have asked for the same exact person. He was as old as many grandfathers—18 years older than my mom—but he was never sick and he was definitely never angry. I remember when he saw a picture of me smoking a cigarette, and he asked, “What is this?” I didn’t know how to answer. I knew he wasn’t happy. But I wasn’t scared. I was just sad, because I never wanted to disappoint him, and I had done just that.

His mom, my grandmother, was a bitter woman. She became a widow at an early age and wanted my dad—her only son—for herself. He did everything for her. When my grandmother finally realized that she would have to share my daddy, she would have none of it, so she never accepted my mom, the “other woman.” She didn’t mean to harm my daddy, but not only did she harm him, she divided the whole family. Because of her selfishness, her son had to live a double life. He spent time with his mom and he spent time with us. He had to celebrate Mother’s Day, Christmas, birthdays, and any other holiday twice. He took us to visit her and we always complained. He wanted to make everyone happy, but he knew it was not possible. My daddy would try to make plans for the future, but that involved having to make plans for his mother’s care. So, his plans always started with the words, “When my mom dies…” He knew that at 90 years old, she wasn’t going to live much longer.

On December 31, 1980, I came down with a fever and decided to pass on a New Year’s Eve party with my friends because I didn’t want to get worse and ruin my trip. I would be leaving the next day to visit my mom and my sister in the U.S., and my dad would come meet us a couple months later to talk about the future. After that, we would spend the rest of my vacation together.

That New Year’s Eve, my daddy told me he was coming home after visiting his mom and we were going to spend the night together at home. Nothing big. Before my dad got home, a few friends came by the house and asked me to go with them to the party. I told them of my plan to stay home with my dad because I had a fever. But they insisted—it was New Year’s Eve, we were going to be graduating from high school, and I wasn’t going to spend the summer with them. So I got ready and wrote a note to my daddy, telling him to pick me up at my friend’s house in the morning. Then we could head out to the airport.

At 6:00 a.m. the next morning, my daddy picked me up, just like I had asked him in the note. He looked at me with those beautiful blue eyes and I realized I had done it again. I had disappointed him. We were supposed to spend our last night together before I left. He had told his friends that he was going to spend the night with me because I was sick and leaving the next day. He kept his promise. I didn’t. When I saw him, I explained that I felt bad for my friends who had come all the way to my house to get me out of bed. He didn’t have to say it, but I could hear him thinking, “What about me? What about our plans?”

I didn’t understand my reaction to our goodbye. It was only a few weeks. Why was I crying this way?

We went home, picked up my luggage, and went to the airport. He didn’t hold grudges, so he didn’t make the ride to the airport uncomfortable. We finalized our plans and talked about our upcoming family vacation. That is why I didn’t understand my reaction to our goodbye. It was only a few weeks. Why was I crying this way? I looked out the plane’s window and saw him for the last time.

My mom was waiting for me at the airport. I called my daddy and let him know that I was okay. The first month was uneventful. I wrote letters to him and he wrote me back. One night, I was alone in a dark room, ready to go to sleep, and I saw my daddy calling me. I opened my eyes and didn’t understand what had just happened. Why was he calling me? Why was he telling me to come with him? That was strange. I told my mom I was afraid; I didn’t want to be alone. We slept together for a whole week after that.

On February 8, 1981, I woke up at 7:00 a.m. and told my mom that I wanted to call my dad. She thought I was crazy. I didn’t care; I wanted to talk to him. I needed to talk to him. I called him. He was awake and we talked for five minutes. We talked about his week and our plans. Then he said, “Please take care of yourself. I love you.” Those were his last words. That evening, my daddy died of a massive heart attack. My mom answered the phone. She hung up and told me, “We have to fly to Peru, Guillermo is in the hospital.” They didn’t say it, but he had already died.

We talked about his week and our plans. Then he said, “Please take care of yourself. I love you.” Those were his last words.

After finally arriving at the airport in Lima, everything seemed like a bad dream, a horrible nightmare. The authorities at the airport let us go through without checking passports or luggage. The first person I recognized was one of my cousins. I didn’t even say hello; instead, I asked, “How is he doing?" She didn’t respond. She didn’t need to say a word; I knew. My sister grabbed me and we cried all the way home.

The next day, we went to the cemetery to bury him. My mom and my sister were next to me, but I was alone. I still remember the hole in the concrete wall. My last goodbye was not at the airport, it was when they covered the hole. The tombstone next to him was my grandfather’s tombstone, and the space on the other side of his hole was already reserved for his mother. How convenient! Now she would spend the rest of eternity next to him. She had made sure to buy three spaces together, like she always wanted.

The night after the burial, I went to my bedroom and fell asleep right away. I didn’t want to wake up. My daddy was gone, and my life was not going to be the same, ever. I was right, but what I didn’t know was that God was sending me a message that was going to last forever. I had a dream. I was skating with my mom and my sister. We saw my daddy far away and I started skating really fast to get to him. I was so happy! I didn’t understand what was happening, but I was quivering. The first words that I could think to tell him were, “What are you doing here? You just died!”

And with his usual beautiful smile, he answered, “No honey, now is when I’m really alive!”

Now is when I’m really alive. Yes, I had heard about life after death. I had heard about the light. I was raised Catholic and I had heard that Jesus was there to meet us when we died. I believed it because that was what they told me, but I had never really thought about it and I definitely wasn’t thinking about it that night. Why was I dreaming about it? It wasn’t a dream; it was a message. Eternal life is God the Father, Jesus, and the Holy Spirit. Eternal life does not end in this world. Eternal life is not a hole in a wall. My daddy was happy and that is what mattered to me. I didn’t think I could forgive myself for not being next to him when he died, but in this dream he told me, “I am happy.” And I knew he was saying, “I will always be next to you.”

This story was originally published on Next To You Stories. You can read the original story here.