“I witnessed the creation of 500 pounds of happiness before my very eyes at San Quentin State Prison.” 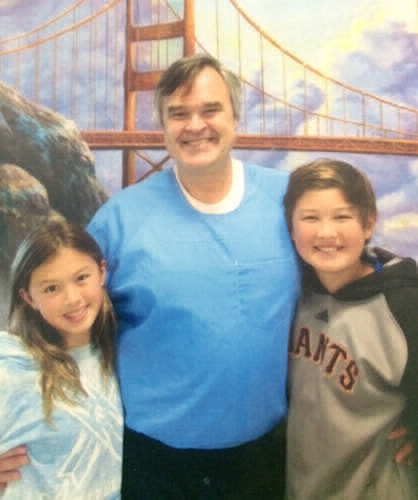 Most people consider happiness to be a feeling, without weight or substance. I know different. I witnessed the creation of 500 pounds of happiness before my very eyes at San Quentin State Prison.

Happiness is rare. It’s not easy to make, nor can you buy it. In fact, it is so rare that even a slight dusting of it engenders a wondrous sense of well being, which is why it is usually perceived as only a feeling, not something tangible.

I know the truth. Happiness is real. It has substance and weight.

In this case, a daughter made happiness as a gift to her father using magic. Allow me to explain.

Magic requires courage, imagination, and perfect timing. My daughter has all three. She knew my birthday was approaching. Because I am incarcerated—I had told her I was serving a sentence, like a time out that would last longer than she had been alive—she made a card to mail to me. But she wanted me to feel her love in more ways than a card can provide. At seven years of age, she knew that cards are good love-delivery vehicles, but they can hold only a small amount. She knew there must be a better way to send her love to her daddy.

Magic was the only option. Her chances to visit Daddy are few and when she does, she has to share him with her brother and mother.

Fortunately, she knows she has a natural talent for magic. After all, she had won three first-place trophies in the NORCAL karate tournament. She knew that her daily rituals had helped her daddy learn to walk again after his accident and her mommy recover from cancer, too.

The best way to send Daddy love was with magic. All she had to do was find a way to plant a magic seed in the fertile soil of another person’s heart and use her sunny smile to speed the process along.

She waited patiently for the opportunity during her last visit with Daddy. She always knows when it comes, just like she knows when to hammer-blow an opponent in karate or steal a smile from Grandma.

It was while standing in front of a vending machine in San Quentin’s visiting room that she found the host for her magic—a man Daddy knew and called a friend. She conjured up her powers, opened her eyes wide, and said, “Excuse me, sir.” She asked the man to say “happy birthday” to her daddy. Little could she know how her magic seed would burst forth into 500 pounds of happiness a few days later.

That man, Aly, had experienced such power before. He had two adult daughters of his own and the little imp’s spell transported him back in time to a pair of smiles meant only for him. In the glow of those memories, the magic seed grew in his heart, and he wanted to do more than merely pass along a birthday greeting. Aly had his own magic, and he would put it to use.

He went to his treasure trove hidden in his small prison locker and gathered 10 bite-sized chocolates—a rare treat. After the morning call of “Wake up, wash up, don’t forget to brush up,” he came to my cell and, with a beaming smile, shouted, “Happy birthday!” Then he handed over the bounty of chocolates.

In shock, I looked at the bounty in my hands. How could such a thing be possible—a birthday known and gifts given?

Aly divulged the source of his secret knowledge and we shared the magical glow of a daughter’s love. I was so filled with it that I turned to my cellie and gave him half of the sweet treasures. After all, he had been in prison for 12 long years without a single visit from his family, and thus had no access to such magic himself.

This small girl’s gift of magic would help all of us speed our time along.

We unwrapped the chocolates and ate them. That is when it happened, the rare magical power of alchemy that alters base matter into something precious. This magic dwells in the human soul and subordinates time and matter to its will, especially when swept into action by love. The chocolate covered in smiles entered us; it was the catalyst. This synthesis of magic and matter transformed into a new substance: 500 pounds of happiness. (I claim only 225 of them.)

This happiness was used to send Aly back in time to relive the glow of his daughters’ love, and it helped my cellie to start his climb out of a deep pit of loneliness. And it gave me the strength to face the challenges of serving my sentence with a warm smile.

This small girl’s gift of magic would help all of us speed our time along.

Indeed, children have amazing recuperative powers once they discover them.