“It takes a village to survive grief. Together we can build resilience and find strength and hope.” 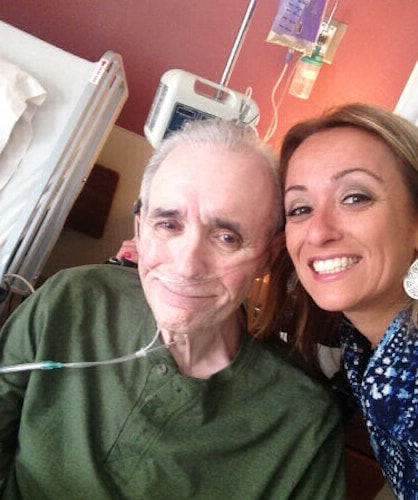 Since my dad’s cancer diagnosis nearly 10 years ago, I have felt anger, frustration, sadness, and anxiety whenever I look at food. For seven years, I watched cancer slowly dismantle my father. Treatments intended to save his life left him with little quality of life. My once active, newly retired father spent the last four years of his life housebound, unable to eat or drink orally, and trembling with severe nerve damage. I have vivid memories of walking into my parents’ home and hearing my father scream in pain so loudly that I would stand in the corner for a moment, cover my ears, and pray. Praying became begging and pleading with God to please grant my father peace.

I felt robbed, cheated, and angry. I wanted my father to be healthy again.

I remember the day my father’s feeding tube was inserted permanently. We were informed that his feeding tube would now be his only means of nutrition; nothing could be administered orally for the rest of his life. From that moment on, I made it my mission in life to find someone, anyone, who could help. I come from an Italian family where food is everything. Watching my father lose his ability to eat was gut-wrenching. I felt robbed, cheated, and angry. I wanted my father to be healthy again. I wanted to have Sunday dinners and holidays at my house. I wanted to cook my father’s favorite meal and toast fine wine with my parents. It seemed so unfair that cancer had other plans for our family.

I watched cancer hijack my father’s body until I could hardly recognize him. Sunken cheekbones, his dark hair gone white. Pale, pasty skin. Brown eyes that were distant, almost empty. Strong hands that had guided me throughout my entire life became thin and frail, and often trembled. The last four years of my father’s life are forever etched in my brain, a painful reminder to never take life for granted.

During the last five days of his life, tubes were coming out of his stomach, his arms, and his hands, making it nearly impossible to hug him. The neverending sound of machines hissing and beeping reminded me that my father’s time was limited. The last few days of his life were unbearable. Despite doctors telling us he would never eat again, I held on to hope that the entire medical field was wrong. How could my young father die unable to eat? It seemed so unfair.

The final day of my father’s life was the worst day of mine.

When my mother called to tell me to hurry to the hospital, my husband and I dropped everything and ran. I walked into his hospital room to find a mask on his face keeping him alive. He held up his hand, waved, and whispered, “Lisa Mia, what took you so long?” The doctor told us the mask was keeping him alive and once it was removed, it could be minutes or hours. I looked at my father, this man I loved and adored, and could not believe this was it. Despite all his pain and suffering, I selfishly was not ready for this defining moment in my life. I was not at all prepared to live my life without my father. I was not prepared to say goodbye to the man who taught me everything except how to live without him.

My dad knew I loved him, but I made sure to remind him a thousand times over that day.

The minutes became hours as we sat by his side. I held on to my father’s hand for over eight hours that day, waiting for him to gain his heavenly wings. And when it happened, when my father died, I lost my voice. Fear, anger, and extreme sadness instantly flooded my entire body. All I kept thinking was, “He was not supposed to die unable to eat.”

I felt robbed. Cancer came into our home like a bull in a china shop, destroyed our family, and stole my father—but first it forced me to watch as it slowly dismantled him.

It has been three years since that fateful evening. I am so thankful that I was able to say goodbye to my father, to tell him how much I love him and to hold his hand as he left us. I recognize not everyone is as lucky, and I thank God each day for letting me say farewell.

I will always miss my dad, but I have chosen to let go of my anger.

I am slowly learning it takes a village to survive the neverending waves of grief. My sadness is now a part of me. I will always miss my dad, but I have chosen to let go of my anger. I have realized that to truly be my father’s living, breathing legacy, I must strive to live as he did, to accept and love people for who they are, and to know when it is time to walk away from a toxic relationship, even if it involves family.

Almost three years later, I’m a calmer person who has accepted my fate. Today, when a friend or relative shows me a photo or shares a memory of when my dad was healthy, my heart swells with pride. I still get teary-eyed, but it’s those memories that keep me afloat. When someone tells me that my father is missed, although I still feel a pang in my heart, I can now smile, too.

It takes a village to navigate the waves of grief. Unfortunately, many have no idea how to comfort someone unless they have experienced grief firsthand. Society has given grievers unrealistic expectations.

First, loved ones die, they don’t pass—and it’s okay to say the words “dead,” “death,” and “die.” When my father first died, I said the word “dead” and an older relative reprimanded me. Not only was she totally out of line, but it’s three years later and—guess what—he’s still dead. It’s normal and healthy to use proper terminology when a loved one dies. I promise they won’t be angry at you, despite what superstitious Aunt Sally is saying. Second, there is no beginning or end to grief. Grief is messy and chaotic. Grief is something we must embrace. Our grief is a stamp of our love, and where there is great love, there is great grief.

It takes a village to survive grief. Together we can build resilience and find strength and hope. If you have a friend who is grieving, make it your New Year’s resolution to become their beacon of hope and light in the darkness.