"He continued to teach me kindness, patience, tolerance, and unconditional love on a daily basis." 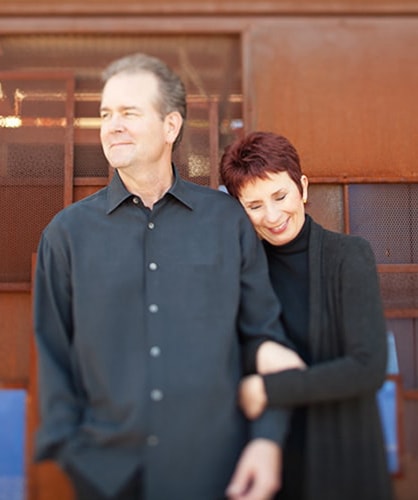 It’s different to grieve the death of a loved one when he has been sick for a long time. It is not as shocking and includes a sense of relief that the suffering is over.

But I’m not sure that it’s easier, though. The grieving starts years before death. And that’s tough for sure.

As early as 2008 Richard started being more anxious. For example, he suddenly developed a fear of flying. Despite first class tickets and flawless flights, he would literally spend the ten hours of an international flight checking his watch every three minutes. Every one to three minutes for ten hours. That’s really hard to do.

Paranoia and anxiety were never far away after that. Hallucinations and delusions dominated our world. Since 2015, Richard needed professional care, and he was in assisted living for a year before I bought the condo below me for Richard and his 24/7 caregiver support.

Dementia and Parkinson’s are horrible diseases. I don’t wish them on anyone. But they do, like any other challenge in life, provide an opportunity to learn and grow, whether you want to or not.

It’s been more than three months now and I’m bridging to my next chapter of life. I had been a caregiver and “extraordinary” wife for so long. Always taking care of every detail. And now that’s over. A bit of a shock really.

Now Richard’s spirit takes care of me, and I feel him every day. He’s much happier to be rid of his uncooperative body and the limitations his diseases brought.

We had such a great life together. It was filled with beauty, adventure, lots of fun, and a deep and lasting love. Richard taught me to be a better person, although I wasn’t really that interested in being better. He considered me a work in progress and continued to teach me kindness, patience, tolerance, and unconditional love on a daily basis. He kept me smiling and reminded me not to take myself or life too seriously. I am so deeply grateful.