Keeping my brother’s memory alive after 9/11 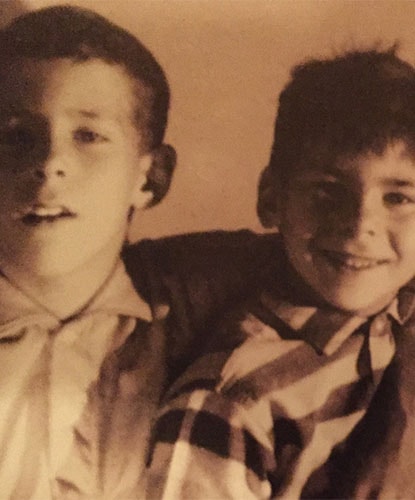 On September 11, 2001, I was on a construction site. My wife called to tell me about some news she saw on TV. Something hit one of the Twin Towers and there was a fire. I needed to call my brother, Joe, right away.

He had already gone to work that day—on floor 103 of the north Twin Tower.

While this was happening, I made my way to a higher vantage point, in order to see the towers more clearly. Once I did, the scene took my breath away—horrible smoke billowed from the top of the building. I was on the phone with my dad when I saw a ball of flame erupt from the second tower.

I recall confusion and countless unanswered phone calls from that day. My brother was missing. My parents took turns crying and consoling each other. After a few days, I visited where the two towers once stood. I stopped at the base of the pile of rubble—what was once 1,360 feet of towers was now an 80-foot mound of smoking concrete, steel, and dust.

In the days following September 11, I felt an outpouring of love and comfort from my family and friends, but also from total strangers.

It seemed that the world united with New Yorkers and everyone became part of my family. The community support got me through the early days.

In the first few years following the attack, I tried to busy myself with my family and business. But I could never feel busy enough to outrun grief. The one feeling that dragged me down again and again was helplessness.

So, I searched for a meaningful way to honor Joe. I needed to make sure he didn't disappear. I thought about things like scholarships and golf outings. Nothing seemed like the right fit.

Then I came across Tuesday's Children. It’s an organization that was formed in the days after September 11 to advocate for the thousands of kids who lost a mom or dad that day.

I volunteered to join their mentor program. As I worked with the kids, I found myself sharing things that Joe and I enjoyed doing with them. In a way, it was like they were getting to know Joe through me.

Volunteering has changed me in positive ways. I have a sense of purpose, and I have a way to take care of my mental health.

In February 2006, I completed my mentor training and was matched with a young boy named Nicholas. Nicholas was two when his father was murdered on 9/11. In 2008, his younger brother, Matt, began to join our meetings. The three of us flew kites, hiked, and fished. We did things Joe and I loved to do. Together, we built a hovercraft made out of plywood, a tarp, my wife's beach chair, and a leaf blower. It was by far our coolest project! It was never my intention to replace their father—I just became their older, immature brother. While their mom thanks me constantly, I consider myself to be the lucky one to be with these boys. They're really good kids. Whenever I drive home after spending time with them, I feel a sense of calm and accomplishment.

Volunteering has changed me in positive ways. I have a sense of purpose, and I have a way to take care of my mental health. Incredibly, something positive came from Joe's death. I’ve also learned to say "why not" instead of "why." The mentorship program has pushed me to go on crazy adventures that I would have never done before: I’ve climbed mountains in Colorado, gone sea-kayaking along the glaciers of Alaska, tried dog sledding in Minnesota, run the NYC Marathon multiple times, and given tours at the 9/11 memorials.

While it still hurts to relive the nightmare of that day, Joe lives on in all the people I meet and mentor.

Jim Giaccone lives in Long Island, New York, and owns a small plumbing contracting business. For the past 11 years, he's been a mentor with Tuesday's Children to two young brothers who lost their father on 9/11. Jim also spends his time volunteering and leading tours at the Tribute Museum.