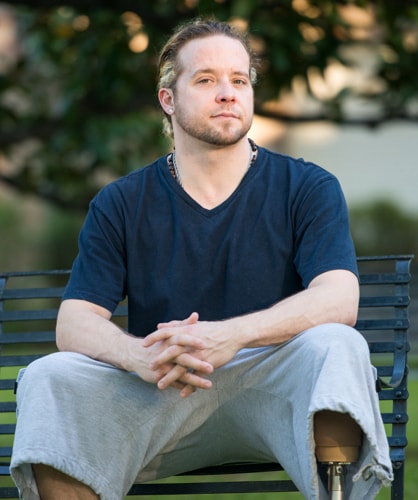 I was born with a bone disease called congenital pseudarthrosis. By the time I was sixteen, I had broken my leg nine times and had over twenty operations. I'd been on and off pain medication since I was seven and I could recognize every nurse and doctor at the hospital. I'd had enough. I told the doctors I was ready to have my leg amputated.

After the amputation I didn't allow myself much downtime. I play the drums, and I had an opportunity to open up for performers like Kid Rock, Ice-T, 30 Seconds to Mars, and more. When I realized I wasn't going to be a rock star, my life went back to normal. I returned to college and graduated.

But the next few years were full of challenges. In 2008 I contracted an MRSA staph infection on my amputated left stump. I was on a collision course to have even more of my leg amputated if something didn't change. I was put on heavy antibiotics. My days consisted of getting up, going to the couch, watching TV, and going back to bed. Rinse. Repeat. I had a lot of downtime. I fell into a depression that led to six accidental overdoses.

I managed to draw strength from others.

That next week I attended my first meeting.

There was a speaker that night from the Haitian National Amputee Soccer Team. He informed me that the U.S. team was having open tryouts soon. I decided to go.

At the tryouts, they tested how fast we could run forty meters. I had one of the faster times. The coach invited me to the next round, and later that year I ended up making the U.S. National Team. We traveled to Culiacán, Mexico, for the Amputee Football World Cup in 2014. Out of thirty-two teams, we came in unranked and left being ranked twelfth best in the world. This past July we placed third in Costa Rica at the Cup of the Americas and brought home hardware for the first time in thirty years of U.S. amputee soccer.

In the meantime, I am keeping my eyes open

All I have experienced thus far has shown me that God put me on this earth for something. I’m still figuring out what it is. But in the meantime, I am keeping my eyes open for opportunities and things I can do—not only to better myself, but to make the world a better place.