“I took on the deep-rooted belief that his condition would not define him; rather, he would define himself.” 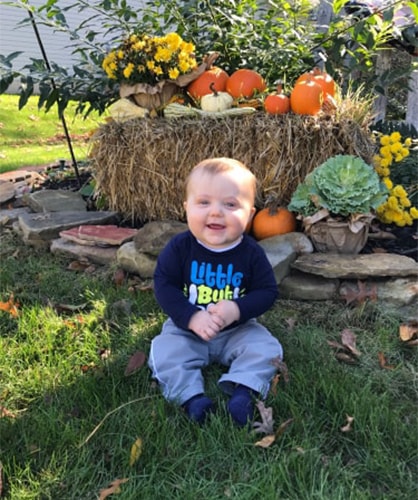 Once you become a parent and they place your newborn child in your arms and say, “Congratulations on your healthy baby boy, he’s perfect!” you immediately feel more joy and love than you ever thought could possibly exist in this entire world. You begin to feel a sense of relief after enduring the obstacles of needing fertility treatment just to become pregnant, the forty weeks of pregnancy spent worrying and saying you just want a healthy child, and then a tough labor and delivery. So, hearing that phrase brings a sense of comfort to your new family. As Zachary’s moms, we felt on top of the world, even if it was only for a brief moment.

Like they say, ”Life can change in the blink of an eye.” For my wife and me it did—actually, it wasn’t a blink; it was the simple roll of Zachary’s eyes when he was seven months old that would change our life forever. Zachary was diagnosed with a rare seizure disorder known as infantile spasms (IS). When we were first told of his diagnosis, we were bewildered because we had never heard of it. The doctor went on to say that infantile spasms are very serious and so uncommon that most pediatricians will see only one or two IS cases during all their years of practice. Upon hearing that, we became very scared, to say the very least.

From that moment on, I knew we were about to embark on a journey that would change us forever.

That week, Zachary went through a battery of tests and once the doctors had all the information they needed, we were pulled into a room and given a detailed explanation of his diagnosis and the impending financial burden. We were also told how important it was to have a support system in place now, not only for our boys (we have another son, Alec, who was two-and-a-half years old at the time), but for the two of us as well. From that moment on, I knew we were about to embark on a journey that would change us forever. In the subsequent days and weeks, my wife—whom I call the “Queen Googler”—armed herself with so much information that it began to break her spirit because it seemed that a good outcome was rare and that anything from irreversible brain damage to becoming disabled was a possibility. I also did my research, but I am a research scientist; I took it on like a task that I would do for my job and not as a mother because I saw how it would cripple my wife both emotionally and physically. I knew I had to pull us together for both of our boys.

Over the next several weeks we saw the disease begin to take away the son we knew.

Over the next several weeks we saw the disease begin to take away the son we knew. He no longer smiled, his deep, bellowing laugh and cute babbling disappeared, and he no longer showed a willingness to engage in the world around him, especially with his older brother, Alec. I took on the deep-rooted belief that his condition would not define him; rather, he would define himself and he would not just survive, he would thrive like no another. My wife would go to dark places, thinking about what may come with Zachary’s diagnosis, so I was always there in the background, repeating those two beliefs.

The one thing I did see was Zachary’s will to fight every day. It made me realize that he was the one supporting us. Zachary has this tenacious resiliency and doesn’t know anything different.

It’s because of him that we have learned to be resilient, but more importantly, to live life one day at a time and see the pure joy in it.

Zachary has not had a spasm for a few months. We are getting back the son we once lost; hearing his deep, bellowing giggle, seeing his beautiful smile, and cuddling him in our arms as he gives wet kisses to both his moms and big brother is the greatest feeling. There aren’t enough words to express what we feel. Well, maybe one word is sufficient: normal. Even though many perceive this word to be insignificant, we think it’s the greatest word we have heard so far in this journey because Zachary’s brain activity is now NORMAL! We still have fear, because this is a lifetime prognosis and Zachary’s spasms (seizures) can return at any time and possibly have some detrimental effects. He will always have a form of epilepsy as he gets older.

There is a poem dear to my heart that I read every day and want both Alec and Zachary to live by:

“Our deepest fear is not that we are inadequate. Our deepest fear is that we are powerful beyond measure. It is our light, not our darkness that most frightens us. We ask ourselves, ‘Who am I to be brilliant, gorgeous, talented, fabulous?’ Actually, who are you not to be? You are a child of God. Your playing small does not serve the world. There is nothing enlightened about shrinking so that other people won’t feel insecure around you. We are all meant to shine, as children do. We were born to make manifest the glory of God that is within us. It’s not just in some of us; it’s in everyone. And as we let our own light shine, we unconsciously give other people permission to do the same. As we are liberated from our own fear, our presence automatically liberates others.”

Zachary, thank you for liberating us from our own fear!