“Now I have the perfect event to mark my 75th—Parkinson’s, be damned!” 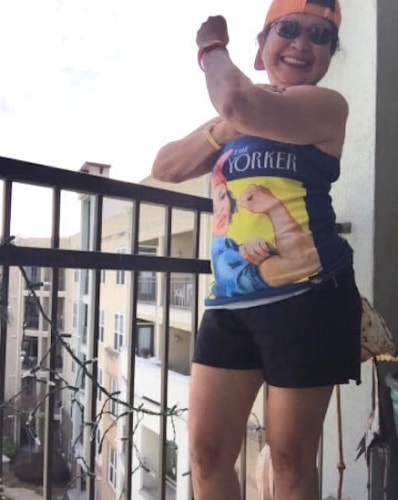 I have been trying to get into the Peachtree Road Race in Atlanta for the past 17 years. I even took a membership at the Atlanta Track Club in order to get a heads' up on the registration. After being rejected every time I applied, I gave up. I found substitutes. In October 2002, I participated in the final Avon 3-Day Walk for Breast Cancer, before the Susan G. Komen Foundation took it over. With my friends, I threw a Mad Hatter–themed 60th birthday party and held an auction that raised $8,413, to support my 60-mile walk effort. For my 70th birthday, I walked the Camino Santiago de Compostela, an 800-kilometer ancient pilgrimage route from St. Jean Pied-de-Port in France to Santiago in Galicia, Spain.

In those 10 years, between the two walks, two life-changing events happened. My husband died in 2004, and I retired from 35 years of medical practice in 2008. I was feeling somewhat unmoored. Looking for direction, I thought achieving spirituality in my life would settle me. I knew I could not participate in organized religion. I was born in the Philippines and baptized Catholic, but I had not observed the faith since adolescence. It had no relevance for me. I went on a Buddhist retreat at the Zen Monastery in Tassajara. It was very exhilarating intellectually, but I could not embrace it fully. Surely, it was possible to achieve spirituality without subscribing to any religion? I decided to answer my question by walking the Camino alone, to achieve the solitude needed for meditation. I was not sure if I achieved my goal of spirituality, but I emerged from the Camino with a clear head and renewed vigor to pursue interests that I did not have time to enjoy before. And perhaps its benefit still reverberates.

Three years after the Camino, I developed Parkinson's disease. It started with barely perceptible tremors on the left hand, then I noticed was losing agility, in dancing the salsa and boogie, and then the cha-cha. My voice changed, and I could not reach the high notes of "Memories" from Cats and "Don't Cry For Me Argentina" from Evita. I started to drop things and stumbled on platform heels. I lost my golf swing and driving distance and my speed and endurance in tennis. My friends noticed I was not as lively and wondered if I was depressed. A year later, the diagnosis became incontrovertible. I had the hallmarks of the disease: tremors, postural rigidity, bradykinesia, incoordination. The other signs, masked facies and monotone speech, altered my characteristic expressiveness. But it had not altered my internal sense of myself, and I did not feel any different from how I was when healthy. My self-diagnosis was confirmed last year, and I started taking medication which has improved my neuromuscular functioning immensely.

I was thinking of marking my 75th birthday. I am an inexhaustible traveler. I had been to all seven continents, had crossed seven seas, and at last count, had visited about 100 countries and five times as many cities. I had been to most states. I was thinking of buying a 45-day Amtrak pass and crisscrossing the country by rail to celebrate. When I saw a Facebook post by Megan, an elite runner and daughter of a friend, about early registration for the Peachtree, I clicked on the link immediately to register. I was shocked that I got in. I still couldn't believe it, but now I have the perfect event to mark my 75th—Parkinson's, be damned!

By the way, I might still do the rail tour. That would be a piece of cake after the Peachtree.