“Resilience is continuing to live, one moment to the next, when it feels like life has played the cruelest joke.” 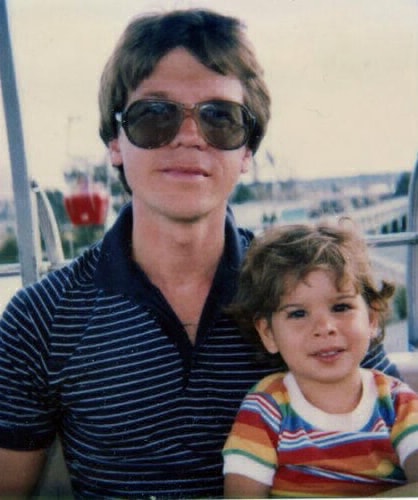 I grew up with a mysteriously ill father. As a young man, he suddenly developed diabetes, osteoporosis, and arthritis. Later came heart failure, as well as liver and kidney failure. He had a liver transplant when my younger brother was six weeks old. He had major hospitalizations almost every year. My family was always on edge, always waiting for the next big thing.

For many years, I felt sheepish about how I was maintaining (or not maintaining) my father’s legacy.

There was no foundation in his name, there was no scholarship at his high school. He has a gravestone, but there’s no body lying beneath it. My dad was incredible, but was I doing my part to tell people about him?

In 2015, we finally scattered his ashes on an island he loved. This was also our first family vacation since he had died. At that moment, I looked at my sister’s pregnant belly, my siblings and me all with partners, and felt relief. We’d made it. Our family was growing, and we were doing okay. I was excited to see what the future held. I looked forward to our next chapter.

Less than a year later, my sister, Alison, was diagnosed with small cell cervical cancer. And then, 16 months after her diagnosis, she died unexpectedly. Not because of cancer, but from a side effect of one of her medications.

Resilience is continuing to live, one moment to the next, when it feels like life has played the cruelest joke.

After my dad died, I thought that we had paid our dues. But I now know that no one is excused. There are no dues. Bad things happen to everyone, it’s just that sometimes they happen sooner than they should. The number of people in my core family has decreased from five to three, but there are now spouses, partners, and grandchildren.

We continue to put one foot in front of the other—this is our resilience. We keep living, even though they do not.