“Andy and I consciously made a decision to unbuckle our metaphoric seatbelts and enjoy the ride.” 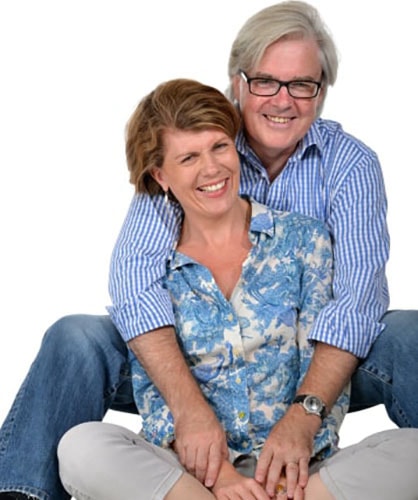 When I left my office that day in November 2004, I had no idea that my career as I knew it would also end that day. I was six months pregnant with our fourth child, working at a busy college as head of marketing. This pregnancy had not been right from the get go, and I attributed the fact that I was finding it harder this time around to being older, as well as juggling a full-time career and the demands of three small children.

I decided to stop by the antenatal clinic on my way home, as I was not feeling well. From that moment on, a chain of events started that changed my life forever.

Daisy Rose was born two months early, just before Christmas in 2004. Not only was she premature, but soon afterwards she was diagnosed with a rare genetic condition called Costello Syndrome. It’s a life-limiting condition that affects multiple systems. Even worse, she had a very extreme manifestation of it. The doctors were not convinced she would live to see her first birthday, let alone adulthood.

I became her full-time caregiver while my husband Andy negotiated an extended period of paternity leave so that we could be there for our family.

Andy and I were devastated watching our little girl go through so much pain. We grieved for the child we thought we were going to have, but we got to know this little girl and loved her so much. And we supported her siblings, still so little themselves, as we spent week upon week in the hospital.

We grieved for the child we thought we were going to have, but we got to know this little girl and loved her so much.

Daisy was a warrior. While we worried and stressed, she bounced back from crisis after crisis, over and over, defying the odds. This vulnerable, brave little girl began to teach us about life and helped us put things very clearly into perspective. She taught us to live every moment and savor the journey. “It’s like we have been bracing ourselves for a car crash, not knowing when or where it’s going to happen,” said my husband. But while we sat bracing ourselves, worrying about the future, we were missing the beautiful views that were passing us by.

Andy and I consciously made a decision to unbuckle our metaphoric seatbelts and enjoy the ride. Yes, Daisy was life limited and she was not going to live a long life. But she was here and we owed it to her and to her three siblings to make the most of the time we had together.

So we had fun, made memories, and lived in the moment, enjoying the views.

Little did we know that this experience was going to serve us well for the next big curveball to hit our family.

When Daisy was nine, Andy was diagnosed with terminal cancer. Suddenly, the need to seize the day became even more vital, as the clock was ticking and the unimaginable was happening. Daisy was going to outlive her father.

The year that Andy was ill and undergoing treatment was the best of times and the worst of times. We made the most of every precious opportunity to enjoy life. We knew from Daisy that often the little things are really the big things—a shared meal, watching a film together, a walk in the sunshine.

When Andy died, just a week before Daisy’s eleventh birthday, it was without fear or regret. We had lived a full life together, said all the things that needed to be said. There was nothing that he wished he had done.

I had to learn how to live without my soulmate, the person I had shared my life with for twenty-seven years.

I had to learn to become a single parent. We had to adjust to becoming a family of five. I had to learn how to live without my soulmate, the person I had shared my life with for twenty-seven years.

Our children were heartbroken and I needed to be there for them, supporting them through their grief. Every day Daisy talked about Daddy and how much she missed him. Sadly, with her daddy gone, Daisy lost some of her fighting spirit and strength. Thirteen months after Andy passed away, Daisy joined him. My last words to her were: “Go and dance in the stars with Daddy now.”

In just thirteen months, our family went from six to four. We have been through more than any family could ever imagine facing, yet the lessons that Daisy and Andy taught us keep us strong and resilient through these times. We are sad, but we are not broken. We are determined to keep moving forward, savoring the ride, enjoying every moment. My family knows, probably more than any other, that no one can predict what the future holds. I have the most beautiful memories of my life with Andy and Daisy, but now it is time to honor their memory by continuing to make memories with my other three children as a family of four.

When it gets dark, we take comfort in knowing that Andy and Daisy are dancing in the stars together, watching over us.