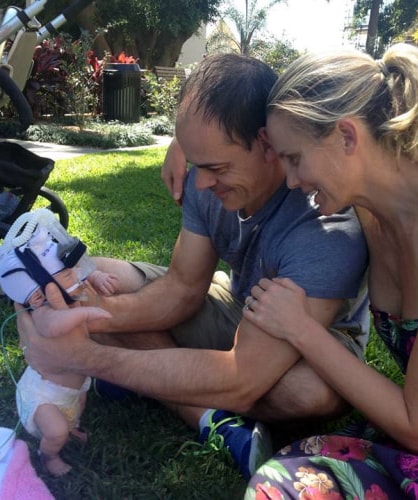 Finally after years of trying there it was … the perfect twelve-week scan of our little bundle of joy. We were so happy and excited and just couldn’t wait for Will’s arrival. I was feeling so relaxed and content with lots of time for rest, yoga, and meditation at the beach, and work was balanced.

And then whether it be destiny or a twist of fate, my membranes ruptured at fifteen weeks and five days while on a babymoon holiday in Mexico. Our lives would be changed forever.

Ninety-five percent of pregnancies deliver in the first forty-eight hours after a woman’s waters break, but not this one. Will held on, and after an ambulance ride and time in a Cancún clinic, we made it home. From this point on we saw the strength of Will, who had to fight to be here.

We lived by the motto “Where there is life, there is hope.”

I had no idea what any of that meant other than the baby needed the amniotic fluid to grow, and I was told that he could arrive at any moment and would be a very late miscarriage. We were given lots of statistics (all extremely poor) and options to terminate every week at our scan, but we lived by the motto “Where there is life, there is hope.” Our boy (although very difficult to see without fluid) was alive and growing each week with a very strong heartbeat. While he was fighting, so would we.

After twelve long weeks of bed rest with many false alarms, our little miracle man Will was still hanging on. And then he arrived in a prolapsed-cord emergency C-section at twenty-seven weeks and wasn’t breathing. But after some oxygen and nitric oxide the nurse told us that he unraveled like a flower into the most perfectly formed tiny baby at 700 grams (1 pound 8 ounces). He was alive!

I was just numb with what had happened and still in shock. So happy and scared all in one, as his prognosis was very, very poor. They didn’t know if he would get through the first twenty-four hours. It was at that point that a midwife said to me, “No matter what happens, he is and will always be your son.” It was the best advice I could have been given. At that moment I decided to start celebrating his arrival and the joy of having him.

And that’s when we started the roller-coaster ride of the NICU. So much happened during that time. Will lived his life each day on the brink of death … literally. He kept bouncing back and proving everyone wrong. The staff made the decision to treat this special baby, not his numbers. We all believed “where there’s a Will, there’s a way.” We were told multiple times this was it; the families were up several times to say good-bye, but he kept fighting. I just believed we had a miracle baby. The staff told us that they had never seen a baby live longer than a few weeks with the lungs Will had.

I look back at everything he went through, everything I put him through, and it breaks my heart, but I know that’s what he wanted. He wanted to be on this earth as long as he could.

Eventually at 104 days old, when all treatment options including experimental treatment had been exhausted, we had to make the ultimate decision to let him go peacefully. The decision we swore we wouldn’t make, but in the end he needed us to make.

He experienced only love. In fact, he was surrounded by love his whole life.

Amid all the chaos of that time, there were so many wonderful things he got to experience. So many parts of what is truly important. He got to see his parents every day of his life and hold their hands. He experienced only love. In fact, he was surrounded by love his whole life.

He got to go outside and hear the birds, sit in the sun, feel the breeze, and even stand up barefoot on the grass. We brought the beach to him and he got to feel the sand between his toes. He listened to beautiful lullabies and was read stories before bed. He had relaxing baths. He got to experience the joy of a swing, pram rides, and even got to watch a National Rugby League grandfinal and get dressed up in a Wallabies jersey.

And he did all of this in what should have been his third trimester.

He has lit up our lives forever and helped so many to appreciate the gift of life we have been given. For some like Will, 104 days is a lifetime. What can you do to enrich yours?

Not only did he do all that, he brought us the gift of his little sister, Liv (meaning life), who was born almost exactly a year after he died. I found out I was 103 days pregnant at the end of my 104-day challenge of doing yoga and laughing every day.