Gymboree founder Joan Barnes, who struggled with bulimia and an exercise addiction, shares how her recovery led to a more fulfilling career and life.

[0:00-0:22] Rebecca: Today, our guest is Joan Barnes. Hers is a deeply moving story, with many dark moments along the rise to success. Joan founded the billion dollar household name brand Gymboree in 1979 with only $3000 dollars.

[0:23-0:47]: It started as a children’s play center, and then expanded domestically and internationally with a franchise model. And then, later, opened up retail stores nationwide. To many, Joan is a celebrated visionary entrepreneur, compassionate leader, and creative marketer. In the next few minutes, The Reveal will uncover some intimate moments of Joan’s life, and what she’s learned along the way.

[0:48-1:08]: Thank you for taking the time to inspire us with your story. So we know you, as the charismatic serial entrepreneur who built one of the most recognizable retail names among parents. And along that journey, you were experiencing a deep, internal battle. What was going on during those Gymboree days, for you?

[1:09-1:39] Joan Barnes: Many things, Rebecca. There was a dissonance between how I was viewed, and even what I projected as outer confidence, and my sense internally of feeling a bit like a fraud, or imposter, and could I really handle all of this? I think all entrepreneurs feel a little bit like an imposter because we have no real blue-print. We’re just figuring it out as we go. And that’s actually pretty cool, that’s what makes us entrepreneurial.

Rebecca: Chart your own path.

[1:40-2:15] Joan: Absolutely. As Oprah says, our instinct is our compass, it is our GPS. In the early years, I didn’t feel so much of that, but as the business started to grow and venture capital started to come in, and things were really a bit above my pay grade, if you will, and still the board of directors was having quite a bit of a love affair with me, and the press. They thought I was going to be one of those rare entrepreneurs who was going to take it from inception to public company. And I kept thinking, I don’t really know that.

[2:16-2:46]: But I kept thinking, a little more success, a little more outer success, and maybe this hole I felt inside would catch up. Very backwards thinking. I had an eating disorder that would go into the background and then come forward. As life would “work out,” as things did become successful, things would just recede. When the pressures built, and when I wasn’t able to manage the pressure, then the eating disorder would become very front-forward.

[2:47-3:15]: I was a bulimic. There was no help for us at the time. And nobody was talking about this. There were very few public figures who said, this is what’s going on. Everybody was in the pretend mode – ”everything’s great, we’re doing well.” And the press had a fascination with a young woman entrepreneur getting venture capital, building a business with business opportunities for women. I was the first “mom-preneur”, decades before that name came to be.

[3:16-3:26] Rebecca: Did you ever consider telling your coworkers, your investors about this problem? There was no one you wanted to confide in?

[3:27-3:52] Joan: Sure, I wanted to confide. Of course I did. I felt isolated and lonely, just as I did as a young mom. That’s why I started the business, that was the impetus for the business – sort of this famine of connection and community. And ironically – the same thing was true – I created a fabulous family culture in the business, but as the business was creating this incredible connection for moms, I was this lone out-post as the CEO.

[4:10-4:35]: There was a time where things were really quite wonderful. My marriage was strong, the kids were great, I was really building the franchise business. I loved having this cadre of women who were having their own business, knew that we were doing something super special. And it was very exciting. And I knew, that if I stopped here, I could have this “balanced life,” whatever that means.

[4:50-5:17]: So as I took my chances, and went forward, and we got into the retail because the franchise business wasn’t going to meet the objectives of the venture capitalists. And then we got to get into retail and we got all the venture money, and I was in over my head, had to let go of my origin team. I didn’t have the tools to walk away. And my eating disorder exacerbated. I was putting everything in front of my family.

[5:18-5:38]: Making this business be successful – never, never, never did I consider being one of those companies that the venture capitalists would write down. I knew well, that better than half of them did go down. It’s very common. But not on my watch.

Joan: Everybody has a bottom. For me, my bottom was – I also had an exercise addiction, along with my bulimia – that I ended up in a Red Cross tent, with a beat up body, and a beat up mind because I had become a competitive mountain biker, and had been pulled off the course. It was in that moment, I knew game over. I was 43, heartbroken, and lost. And I thought, I can’t do it anymore.

[6:12-6:37]: So it may not sound like a serious bottom. I wasn’t on the corner of 5th and Mission with my bottle, but for me, I was done. And I couldn’t run the company anymore. I went off to what was going to be a 30 day treatment program, and three years later, I returned home. One of the daughters had gone off to college and the other was a senior in high school. So it didn’t look like I was abandoning my family either. But, in fact, I had nothing left.

[6:38-7:11]: When I did return, I came home to no home, no marriage, empty nester, and no job. It was a far cry from the woman peering out at me from People’s Magazine four years before. So I guess we could call that a reinvention. But, to tell you the truth, my recovery is the proudest moment of my life, and still remains. I would never be woman I am today, had this never happened.

[7:12-7:27] Rebecca: The Gymboree IPO in 1993 yielded a stock price boost of 58% on its first day. That is a massive milestone that so many people would only dream of getting to, yet you missed it because you were in recovery.

[7:28-7:49] Joan: I had just come back from recovery to sort of test drive my years away, to see whether or not I was strong enough to withstand the inevitable triggers – I call them Pacific storms – that would happen when I heard about the IPO that had happened just a few days before. Now you would’ve thought, this is the entrepreneur’s dream, right? 15 years of devotion and drive, and this happened.

[7:50-8:18]: And you know what, I assessed inside of myself because I had me now, ah yeah, that would’ve been great to celebrate that with my origin team, but we’re all gone now. Good for Gymboree, and good for me that I was able to get that company to a point that it could grow to that and that could happen. And I’m so excited about the new woman I’ve become inside, and what she’s going to become in the next iteration of my life. I had no regrets. It’s amazing to me too.

[8:19-8:56] Rebecca: What do you hope that readers of your story and viewers of this video take away from a story like yours?

Joan: I really hope that they’re in the sidecar with me, because I believe that my story is your story, is our collective women’s story. Granted, the circumstances are different, but the idea that we all have inversions, blind curves, skillful decisions we’ve made, more trouble. But it will help us realize that we all are the same, we really are all the same.

[8:57-9:27] Rebecca: You’ve written about your personal and career journey in this book, which I loved, Play It Forward. Even from the first page, I couldn’t help but think, this story takes so much courage to share.

Joan: The great Chinese artist, Ai Weiwei says, maybe to be vulnerable is to be powerful. And I have found, that it is in our vulnerability that we become connected to one another. It is an art being able to share that we find each other’s hearts.

[9:28-9:40] Rebecca: Well it is such a fun and inspirational journey to be on with you. Thank you for sharing it, we appreciate it.

Joan: Thank you. Thank you for having me on Reveal, I’m just honored.

Rebecca: Honored to have you.

This video was created by The Reveal. The Reveal creates unscripted, inspirational stories of business leaders who have transformed personal adversity into fuel for career success. For more videos, visit www.therevealco.com 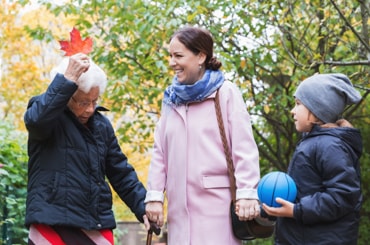 Care for the Caregivers in Your Life

Experts from Hidden Heroes, a program that raises awareness about the challenges facing military caregiving families, share four steps you can take to help a caregiver recharge and feel supported. 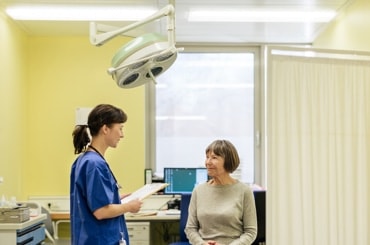 The Cleveland Clinic's chief experience officer shares what she's learned from her patients about the power of empathy and acceptance. 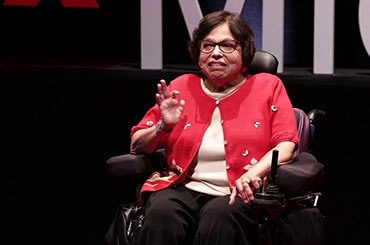 How to Fight for People With Disabilities

Activist Judith Heumann explains steps we can take toward a more inclusive world for people with disabilities.

Find advice, solidarity, and support from people who have firsthand experience with the kind of challenges you’re facing.