“As I got better, I started to feel that it was time to give back.” 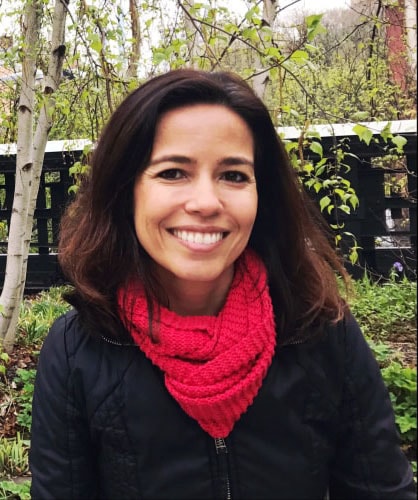 June 1, 2009. It was not yet eight a.m. when a good friend called asking me which flight Leo had taken the night before. He was thirty-one years old, an adorable guy, a bright young oceanographer, a beloved son and brother, and recently my fiancé—we’d gotten engaged the week before. But yes, very sadly, he was one of the 228 people who took the airplane that crashed into the sea going from Rio de Janeiro to Paris and left behind broken hearts and a long way through grieving for hundreds of people.

I don’t remember how I drove home after hearing the news, but I clearly remember all the mess that followed. I told my roommate and passed the news to Leo’s father. And then, it seemed, the whole world came to me. Family and friends called and showed up with love and treats. I truly appreciated every gesture of empathy and care, but deep inside I felt that the only person who could hold me was not there. My mom had died 364 days earlier, after bravely fighting cancer for almost three years. She was/is my best friend, and losing her hurt even more after Leo died.

I truly appreciated every gesture of empathy and care, but deep inside I felt that the only person who could hold me was not there.

It’s been a while since all of that happened, and it’s difficult to summarize a very long and nonlinear path in a few sentences. But there are a few things that I would like to share here that might resonate with those who have been through a severe loss:

In the beginning, it felt like I had fallen into a very dark and unfamiliar hole. Now I know that nothing prepares us to face death so close, but the truth is I felt lonely and inadequate anyway in my early thirties. Who could I talk to about what I was feeling? Grieving seemed like a solid taboo, and I felt that people (with the best intentions) wanted to see me feeling good again. I knew, though, that I first had to deal with my sorrows.

Grieving seemed like a solid taboo, and I felt that people wanted to see me feeling good again.

I tried it all. Moved to another city, worked as much as I could, engaged in healthier practices, searched for grief therapy. Some strategies helped me a lot, others not so much. Despite all the help that came from others, it was clear that "feeling good" was up to me—much like being doctor and patient at the same time.

Do you know the feeling?

Naturally, I have become more aware of people’s problems and pains. I am not sure how that happened, but after a while I realized I had acquired a great amount of empathy for friends and colleagues going through family illness and loss. As I got better, I started to feel that it was time to give back.

My mom and Leo gave me a lot in life, having left memories and learnings that keep them alive. They are with me, always. And one of their best legacies, one that makes me extremely proud and passionate, is the project Vamos falar sobre o luto? (Let’s talk about grieving? in English). This is something that started as a personal question and became a beautiful project with the energy and partnership of six other friends who also had their experiences with grief. We launched it in Brazil in 2014 as a digital platform to inspire and support those who have lost a loved one. Since then, we have been making a massive effort to change culture—carving space for the subject in the media and making it a part of social conversations.

May 15, 2017. It’s not been easy, yet (as cliché as it sounds) I have learned so much. It’s not like I wish people had the same experience, but being close to death so early in life has deeply evolved who I am—I have learned to welcome bad moments and transform despair into something new. I have countless people to thank for helping me build happiness and peace. But again: the courage and resilience came from within, and I believe this is the only way through it.