Becoming a mother, after losing mine 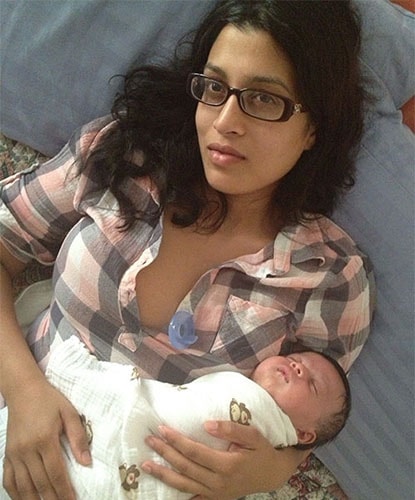 I was just wrapping up a routine annual doctor’s appointment and was zipping up my boots when there was an impatient knock on the examination room door.

“It’s positive,” my doctor said, as she entered the room with what looked like a pregnancy test strip.

“You’re pregnant!” And then, after an uncomfortably long pause, she added, “I’m sorry, I thought that was what you wanted.”

All signs pointed to my being ready. I was 33, married and financially comfortable. We lived in a decidedly family-friendly Brooklyn neighborhood—one that was well equipped with mommy groups and parent forums.

As I returned to my office downtown, I took out my phone to tell my mother the news. I started to type in “Mom.” My phone offered me Maryam and Monica, but not my mother. She had died four years prior.

Losing a mother with whom you were extremely close renders all of life’s conventional joys bittersweet.

Losing a mother with whom you were extremely close renders all of life’s conventional joys bittersweet. Pregnancy—and impending motherhood—was no exception. I had made it through my wedding the year before with relative grace, having scheduled it on her birthday, so we could celebrate her every year. But my ambivalence about motherhood stemmed from a deep sadness that I would not be able to make that phone call when I felt that first kick in the womb or when my baby smiled for the first time. I worried that those milestones would feel meaningless without my mother to share them with.

Images of my mother are marked by contrasts: voluptuous lips, paired with girlish dimples. A soft, benign face, with a head of frizzy hair. A petite woman with a booming laugh. On Mother’s Day, these images are particularly vivid, perhaps because Mother’s Day five years ago was the last time I saw her. It was when I saw her image, to be specific, on Skype. I sat in my tiny Brooklyn Heights apartment that day, coffee in hand, nursing a hangover from a friend’s birthday the evening prior. She sat at a desk in India, where my parents were on vacation, and gazed back at me through her computer screen. Intermittently, an online Sudoku puzzle would avert her eyes. We exchanged stories about the mundane details of our days, and she laughed when I told her my nephew had kept a lollipop in his underwear for safekeeping. Our conversations were comfortably ordinary.

She would thank us for making her a mother.

My mother hated Mother’s Day. She always said that she never felt entitled to appreciation for being a mother, since it was she who had made the decision to have children. Children don’t ask to be born, she would remind me. In fact, she would thank us for making her a mother. That year, she sent me an online Mother’s Day card with a recording of her voice. I still listen to that recording on the nights that I cry for her.

My mother died later that night—on Mother’s Day, the holiday she despised. The next morning, when my sister had called to tell me my mother had suffered a massive cardiac arrest in her sleep, I thought my grief would kill me. And in my darker moments, I found myself wishing that it had. A friend who had also lost her mother reminded me that I would “see the beauty in life again.” I clutched her words tightly, repeating them often. I started to believe them on sunny days and at the first blooms in spring, my mother’s favorite season. I believed them the day my son was born.

Though I wanted to believe the universe had given me signs from my mother, I just wanted to see her.

“Dimples” was what my husband and I simultaneously whispered when we saw our son’s defining feature for the first time in the glaring light of the delivery room. “A kiss from your grandmother, on each cheek,” my husband told him. And when we took him home from the hospital, we spotted not just a rainbow, but a double rainbow. “Your first visitor, your grandmother,” my husband told our new son. Though I wanted to believe the universe had given me signs from my mother, I just wanted to see her.

My inbox is unrelenting, urging me to send her flowers weeks in advance of Mother’s Day. The city that day is a bit more empty. Twenty and thirty-somethings pile onto the trains and head to the suburbs, their faces obscured by flower arrangements. In restaurants, others take advantage of these empty spaces. Often, it’s the mothers who fill them. They contently hold their grandchildren, contained by interlaced fingers. I wish at those times that my own mother could fill that empty space. Most fervently, I wish that I could renegotiate this day. There’s little comfort in the trite (but true) adage that “holidays are the hardest.” I’m not seeking to validate my grief, I simply want respite from the reminder that I’m not allowed to get onto a train to tell my mother how much she’s always meant to me.

Because when life becomes difficult in a world you didn’t ask to join, the world your mother created for you can sometimes be your only solace.

I considered my mother’s words, that children don’t ask to be here. Now that my son is here—he has been in this world almost as long as he grew in my body—I feel compelled to make this world as safe and happy as I possibly can for him.

Because when life becomes difficult in a world you didn’t ask to join, the world your mother created for you can sometimes be your only solace.

I recently brought my son to the park and watched as he squinted in the sun and smiled at me, his dimples deep and prominent. I imagined them as a gene that flowed from her blood to mine, where it lay dormant until he revealed it again. I wanted to thank him—in that moment, as he squealed with happiness on the swing—for allowing me to forget about myself for a moment, and for returning a mother-child relationship to me. I also wanted to thank him for carving a new pathway in my grief journey, because even when a mourner starts to see the beauty in life, they sometimes need a break to grieve. And I wanted to thank him for allowing me to love someone perhaps even more than I loved her. I wanted, I realized, to thank him for making me a mother.

And this Mother’s Day, I will.

Sarah Rasheed is a lawyer living in Brooklyn with her husband and two children. This piece was originally published on Modern Loss, which offers community, storytelling and practical content on loss and resilience. Check out the new book, Modern Loss: Candid Conversation About Grief. Beginners Welcome (Harper Wave, 2018)