“Even though I expected it, you can never prepare yourself for when it happens.” 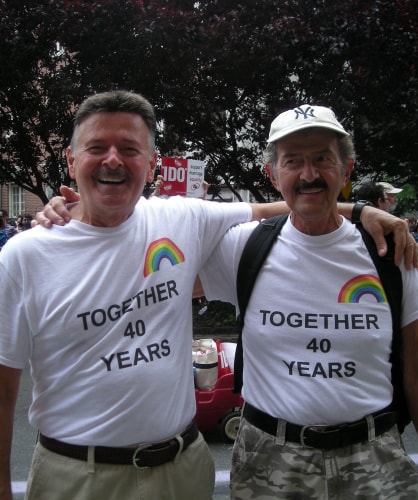 We had been together for forty-three years on that anniversary, December 29, 2016. I lost him two days later. He had been so much more than a spouse, lover, best friend, and mentor.

He was much stronger than I was. “If it’s broke we have to fix it,” he said.

We were both devastated when he was diagnosed with squamous cell cancer behind his tongue in 2008. When told he had to have his teeth removed prior to the radiation treatment, his eyes filled with tears. I asked him to please stop—“We will get through this.” He was much stronger than I was. “If it’s broke we have to fix it,” he said.

After he had a feeding tube installed, he underwent simultaneous chemo and radiation treatments for several weeks. Upon completion of his treatments, the feeding tube was removed and we returned back to our somewhat normal gay lives. Five years later, we celebrated that he was now a cancer survivor. It was a short time after that when he started having trouble swallowing. The oncologist informed us that it was the start of DRAD, delayed radiation-associated dysphagia. We were told it was common for throat and neck cancer patients and would get worse.

It was difficult for me to eat while he was feeding with the tube. I tried to hide my tears while I ate and one evening broke down sobbing.

And worse it got. He went from eating soft foods, to pureed foods, then back to the feeding tube he was on during his cancer treatments. He lost so much weight that I had to monitor his nutrition drink to get him back to where he should be. During this time, he developed COPD and was put on oxygen 24/7.

At first, it was difficult for me to eat while he was feeding with the tube. I tried to hide my tears while I ate and one evening broke down sobbing. He comforted me instead of me being strong for him.

I wanted to marry, since it was now legal for us to do so. Our lawyer married us on May 6, 2015, with our straight friends as witnesses. I cried during the ceremony and had difficulty saying our vows since I knew time was not on our side.

He was admitted to the hospital on December 28, 2016, because of blood in his feeding tube, which had been replaced a few days earlier. I slept at the hospital next to his bed. Neither one of us slept very well there, so he was anxious to get discharged and go home on December 31, New Year’s Eve. When we got to our house late that afternoon, he asked me to help him get out of the car. I told him that he would have to have a feeding, then we would go lie down and set the alarm for midnight to watch the ball drop on TV in Times Square.

I got up around eight p.m. to go to the bathroom, and when I returned to bed, he was reaching out with his arms and shaking. I knew this was it and shouted, “Roy, I love you!” as I grabbed his outstretched hand. I watched his eyes roll and knew he was gone before I even called 911.

Even though I expected it, you can never prepare yourself for when it happens.

I kissed his forehead as they took him from the house. Knowing I would never see him again was the hardest for me to bear. I could not imagine a life without him. Having also lost my immediate family—both parents and siblings—a terrible loneliness fell over me.

My niece, who lived in another state, became my closest confidante. She called me daily, and I was able to cry my heart out to her, where I tried to hide my grief with other friends and neighbors. During one of our conversations, she mentioned watching Sheryl Sandberg on The Ellen DeGeneres Show promoting her book Option B. She recommended that I get a copy to help me at this difficult time. I knew intellectually that it would take a while to overcome my loss, but it seemed like Roy’s death would affect me for the rest of my life and I would never find joy in anything again.

I have a way to go, but now I know I did the best I could for Roy. He often said that if it wasn’t for me, he would have been gone long ago.

I read the book and found it most helpful for building resilience in my own grief. The three P’s (personalization, pervasiveness, and permanence) were indeed stunting my recovery. After completing the book I read it again, marking passages I found most helpful. I have a way to go, but now I know I did the best I could for Roy. He often said that if it wasn’t for me, he would have been gone long ago.

Being retired and living on two and a half acres, I need to keep myself busy and take on the maintenance Roy was so fond of doing. Thanks to Sheryl Sandberg and Adam Grant, I now understand that I will not always feel this awful, just sometimes.