“What I do know is that her death has taught me how I want to live—with joy, gratitude, adventure, and hope.” 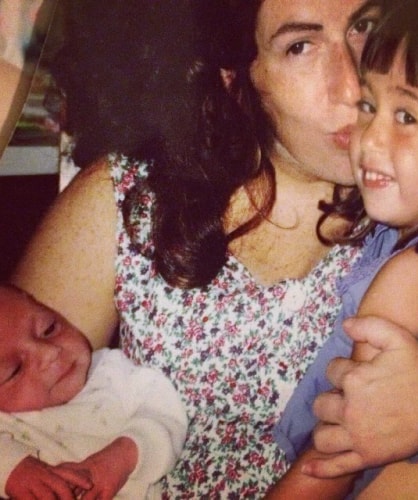 “July 29 (A.M. either way you look at it)—TWA Flight 700 to London will be passing over Shannon, Ireland, momentarily and is due to arrive at Heathrow in 45 minutes. The sky is bright up here and I feel a bit of jet-lag already. Among my fellow passengers: a middle-aged couple on their way home—the wife with foot propped up next to my seat; a husbandless wife and fatherless infant en route from tragedy in Utah; a hearty Southern couple on a whirlwind tour of 4 countries; and a man who bursts out singing on and off from Italy… I have seen the world and it is here." – Deborah Graham, Journal, 1979

In November 2015, my mom, Deborah Graham, passed away from complications from ALS and Frontotemporal Dementia (FTD), two incredibly unforgiving diseases. I was twenty-seven and she was fifty-eight. My mom was a Harvard graduate, published author, elected school board member, amateur musical writer, and, most importantly, a parent, wife, sister, and friend.

When my dad called me, his voice breaking, to tell me that my mom had passed away that morning, my body immediately curled to the floor. Never before had I felt that lying face down on a cold, dark, wooden surface was the only place I wanted to be.

For years, I had been traveling back and forth from the East Coast to my hometown of Chicago to visit my mom and spend time with her, first in my childhood home and then at the memory care facility where she lived for the last six months of her life. Over time, I watched as she lost her ability to speak, write, move, eat, and eventually live.

Over time, I watched as she lost her ability to speak, write, move, eat, and eventually live.

Watching such a strong woman become stripped of even the most basic of functions was heartbreaking. But it also taught me more than I could ever imagine about love, gratitude, and how I want to live.

During our final in-person conversation, about a week before she died, I lay next to my mom in her hospice bed. She was, as I liked to say jokingly to her at the time, “all skin and bones.” Non-verbal for over a year, she and I had grown accustomed to having conversations through our bodies—a thumb up or down, an emphatic wave of the hand, a twinkle or tear in her eye. Though I have no proof, I firmly believe that despite all that had been taken from her, my mom knew that this was our final conversation. This was it.

Motown music played softly in the background—Stevie Wonder, the Supremes, Marvin Gaye—sounds that stop me in my tracks to this day if I hear them in a restaurant or the car. I looked my mom in the eyes and read off a series of words and phrases, things that she had taught me or that we both loved. Education and advocacy. French fries and coffee. BBC mysteries and feminist theory. I thanked her for being so compassionate when I came out to her as gay in college.

I promised that I would carry on her legacy.

Over the next few months, it was hard to grasp what exactly carrying on my mom’s legacy could look like in my own life. After she died, I felt so much grief—not just for her life, but for the person I was before she died.

It felt impossible to be “as good” as I was before—as idealistic, as healthy, as happy, as good of a friend, as good at my job, as good to myself. I struggled. Not just to be good to myself or those around me, but to adjust my own expectations about what it meant to “be good."

The only option was to move forward.

I finally started to realize that no matter how much I wanted it, I couldn’t go back to the person I was before my mom died. The only option was to move forward.

In February 2016, on what would have been my mom’s fifty-ninth birthday, I sat in a coffee shop, my body sinking into a yellow armchair. I’d spent the morning looking through old letters and photographs that I inherited after she died, and one possession in particular caught my attention. It was a journal. A beautiful brown leather journal, filled with my mom's distinctive handwriting, depicting a European adventure that she embarked on one summer in her twenties with her closest friends from college.

I'd grown up hearing about this trip, but as I started reading, I came across stories I had never known before: a Palestinian man named Ramsey who my (ardently Jewish) mom had fallen in love with in London; the trials and tribulations of traveling with close friends without email or cell phones; an act of violence in Rome that would change her life.

I knew instantly that I had to do the trip. Travel to the countries my mom traveled to, spend time in the places that impacted her, and, most of all, give myself the space and time to heal, to grow, to feel connected, to grieve.

This summer, I will embark on my own journey to London, Paris, Rome, Venice, Berlin, Amsterdam, and Iceland. I will travel as much as possible by train, just like my mom did. I will write, just as she did, sharing my thoughts on a blog called “What the Living Do” (inspired by the amazing poet Marie Howe). I am extraordinarily lucky to have some of my closest friends and family joining me for different legs of the trip, to support me and honor my mom's memory.

The dictionary definition of resilience reads: “the capacity to recover quickly from difficulties.” I know now that I will not recover quickly from my mom’s death. I may not even "recover" at all. What I do know is that her death has taught me how I want to live—with joy, gratitude, adventure, and hope.

This trip is only the beginning.