“I have to keep going for the kids, but more than that, I’m sustained by the thought that I mustn’t let George down.” 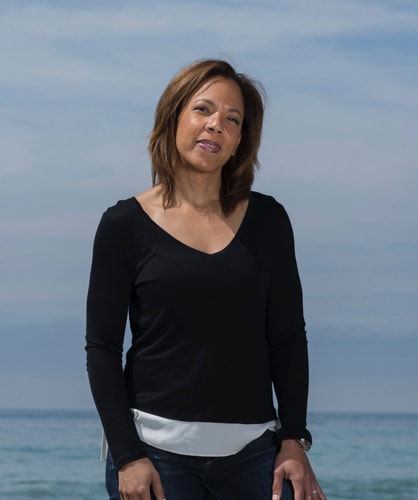 My husband died in 2015. He was forty-eight, and we’d been together for seventeen years. It’s corny, but he was my best friend—everything in my life revolved around the two of us.

He died from a pulmonary embolism, a blood clot in his lung. It was completely out of the blue. The kids and I were at the beach, and George was back at the house. When he called 911, he couldn't breathe. He was trying to tell the EMTs to call me, but he just couldn't get the words out. I never saw him alive again.

I sometimes cry in front of them now, because I think it's important they know that I'm sad too.

In the days following George’s death, I would leave the house to call friends and family. I didn’t want my sons to see me upset. But my eight-year-old son would run out to hug me and hand me tissues. To this day, if I sniffle, my sons ask, "Are you okay, Mom?" I sometimes cry in front of them now, because I think it's important they know that I'm sad too. It's okay to be sad.

From day one, I’ve consciously talked about George with the kids. I’ll often say, "Who does that remind you of?" They'll reply, "Daddy." I want to make sure he stays alive in our memories.

On the anniversary of George’s death, I took the boys to the ocean. We wrote messages for George on rocks we collected and pitched them into the waves. The things they wrote were really precious. It was a special moment together for all of us.

How have I survived? I'm not even sure. I have to keep going for the kids, but more than that, I’m sustained by the thought that I mustn’t let George down. I don’t want to disappoint him. I want to live up to the vision that George and I both had for the kids.

But for the time being, I’ve found meaning through creating joy for my sons.

What’s helped me the most has been connecting with other widows. When I hear their stories, I think, "I'm not the only one." Some widows I know have moved on and gotten married, but they're still wounded. You may find happiness again, but you're never going to be whole. Right now, it’s still hard to imagine finding joy for myself, but for the time being, I’ve found meaning through creating joy for my sons.

Karla Scoon Reid is proud to be both. She’s biracial—the daughter of a black father and white mother. She’s a citizen of two nations—America and Canada. Karla’s been a tenacious award-winning journalist and a frazzled, but happy, stay-at-home mom. Today, she’s a working single mom and a widow warrior on a whirlwind journey she never contemplated traveling alone.