“My calm, steady, happy husband was now missing a part of himself. I wondered: Does that part ever grow back?” 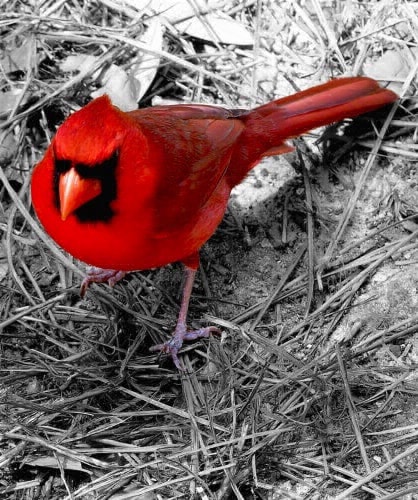 In April 2014, a series of 85 tornadoes plagued the Deep South. Days before the storms began (and long before meteorologists predicted the impending weather), a flock of golden-winged warblers fled their breeding grounds in the Cumberland Mountains of eastern Tennessee (where they had only just arrived) for an unplanned migration. Scientists later discovered that the birds traveled 932 miles in five days to steer clear of the looming danger they somehow predicted.

This behavior seems miraculous, but it’s not rare. History points to many instances that appear to demonstrate birds can sense a storm coming long before it rolls in. Researchers haven’t defined the exact reasons for how or why, but this curious fact seems to remain: Birds know danger. And birds know first.

On January 1, 2018, I woke up thinking I had lived, learned, and survived my full quota of hard life lessons. It was my 31st new year, after all! I was married, working, settled, and—for the most part—content. As I began another year with both reflection and anticipation, it occurred to me that I had become aware of myself in my life. I had a clear sense of what I was pretty good at (listening) and what I needed work on (not procrastinating). I knew what I wanted more of (writing) and what I had best stop tolerating (not sleeping). I knew the precious gifts I had been given (family) and how many curveballs life had thrown my way (thankfully only a few).

People say that life can change in a matter of moments. I now know life isn’t courteous enough to make it happen that fast.

I welcomed the new year with friends and champagne, worked through early January with clients excited to tackle their supercharged resolutions, and then jetted to the Caribbean to celebrate my fifth wedding anniversary with my sweet husband. We had saved money and time to take this trip—and I was conscious of the good fortune that allowed us to be together, alone, in a warm and beautiful place. Each morning began with the same ritual: a look up into the sky and a whisper to the clouds that this day (and this day and this day and this day) was the happiest day of my life.

People say that life can change in a matter of moments. I now know life isn’t courteous enough to make it happen that fast.

Imagine: One frigid Friday evening, you are enjoying dinner for a friend’s birthday. Your husband is in charge of ordering for the table because it’s what he’s always done. Mid-order, he gets a phone call from a family member, which immediately seems odd, considering the day and time. When your husband tells you his dad is suddenly sick—really sick—but it’ll be okay, you believe him, but cannot ignore the panic in his eyes. You smile in reassurance, but quietly ponder whether something irreversible has already begun.

The subsequent hours are blurry, but you get comfortable in the hospital and pray like you were born to do only that. Hope becomes a desperate prisoner in a tiny waiting room where every sound is amplified, every word is hushed, and every interaction is sacred.

You grow and shrink simultaneously over the course of the next few days. You reach out for a miracle and come back empty. Emotions jumble. Panic. Pain. Pleading.

And then, there are no more thens. The world changes. It’s missing a piece.

In the bleak days following the funeral, I would have done anything to take away my husband’s pain.

But in an ironic loophole in all my training as a life coach, I found I had no power to help. Darkness approached quickly and ruthlessly. It enveloped our house with a force so suffocating that there was no choice but to surrender. Outside, my husband’s universe was everything it had been before—but now void of the illuminated North Star that showed him how to navigate it.

It was on one particularly dark winter day, when hopelessness seemed my closest companion, that I looked outside to see a brilliant red cardinal perched near my window. The contrast of his intense brightness against the barren tree was striking—a welcome respite from the recent sepia shade of our life. He stared at me closely and intently as if to say, “you will see color again, I promise,” and then flew away.

My husband spent the rest of that day hovering near the window, waiting for the bird to return.

What I couldn’t understand before I experienced seismic loss for myself is that there is a minuscule line separating health and illness, joy and hopelessness, life and death. That we are equally susceptible to all of those, and that we aren’t privy to which we will be assigned, or when. That there is a long, labyrinthine hallway between losing someone and then missing them, and that there is a grieving process at both ends. That there really is no way to love someone as if it’s your last day with them, because there is no reference point for what life without them will feel like. That only in feeling the pain of missing them do we understand the depth of our love. (How beautiful, and yet how desperately unfair.)

Life can gut you without warning, and expect you to wake up tomorrow and stand in the coffee bar line and make small talk about the weather. It offers no solace but time, and time is a shitty nurse.

My husband’s loss revealed his soul’s basement. My calm, steady, happy man was now missing a part of himself. I wondered, “Does that part ever grow back?”

My experience paled in comparison, but it was complicated. I felt deeply guilty that I still had my own parents, anger that I couldn’t take away the pain, and hopelessness that came from fearing my husband’s smiling eyes would never be quite the same.

I miss Bill, my father-in-law. The effortless way he made things funny when they weren’t. The way he was equal parts no bullshit and all heart. The way he loved his children, and the way he completed his wife. He was unlike anyone I’ve ever known, except that in his absence I realize his closest clone is the man I live with—a fact that now both comforts me and emphasizes the magnitude of what the loss feels like for my husband. I long for all the things my father-in-law still deserved to be. The retired wanderlust he could have been. The doting grandfather he would have been. The much older man he should have been.

I think Bill was the reason Chicago was stuck in January (the month he left us) for so long past its calendar expiration. We had an insufferable spring with temperatures in the 30s, considerable snowfall in April, and the Chicago Cubs postponed their opening day for the first time in 60 years. (Even Bill’s favorite sports team seemed to fare worse without him here.)

As for us, we’re still stuck in January, too. And maybe we will be for a really long time. But you know what? The Cubs are flirting with first place again. Temps will inch back up into the 80s for the weekend. And I’ve finally noticed that the birds have made their way north again, bringing summer with them. They’ll be perching as watchful noticers of the world around them. They’ll visit us for a few months, and sing to us the truth about what’s coming. And we’ll listen.

What you should know is that my window-perched cardinal came back.

Birds fly away from danger, but they always come back home. I think that’s because they know what we do not: that bad things only happen sometimes. That the sun comes out again. That storms can render us fleeing and broken, but that we can be brave enough to rebuild our homes.

What you should know is that my window-perched cardinal came back. He came back—and he has continued to come back—at least once a week, for the 20 weeks that have passed since we lost Bill. And on the days that seem the most colorless, he often visits twice.

So yes, all the birds are back. I want to believe their happy melodies are a hopeful foreshadowing of everything they understand to be coming—not predicting doom, but promising goodness. My hope is that they can sense a healing year full of everything wonderful I am not meant to know.

This story was originally published on ThriveGlobal.com. You can read the original story here.