Paying homage to my dad on Father’s Day 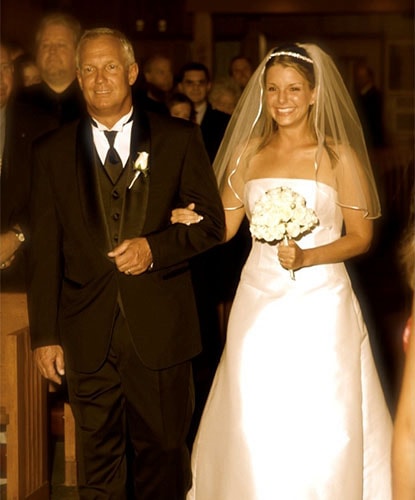 I was 10 when Dances with Wolves came out. I thought it was a beautiful film, but all my family took from it was the humor in nicknaming people after their traits. My father called me ”Talks-A-Lot” until I asked him to stop as a 12th birthday present.

He wasn’t a coddler. Anything that could be construed as whining was refuted with, “So what are you gonna do about it?” When we were sick, he told us to play hurt. When we led with fear, he said, “Are you a man or a mouse? Squeak up.”

His demands for us were philosophical. We were to be hardworking and open hearted, to think bigger than the small town we lived in.

He believed in my sister and me, even when it came to things that fathers are traditionally protective about, like the boys we dated. There were no threats made, no timely gun cleaning. He said, “If you like him, I like him. If you don’t like him anymore, I don’t like him anymore.” His demands for us were philosophical. We were to be hardworking and open hearted, to think bigger than the small town we lived in. We were encouraged to speak freely and warned not to trust anyone who was certain they had it all figured out. “Opinions are always right,” he said once, referring to the fact that varying experiences bring people to different conclusions and understanding that is the key to humanity.

We talked every night. He was an amazing listener, accounting for the speaker’s personality in a way that allowed him to hear words between words. And man oh man, did we laugh. The day I got rejected from Brown—my top choice—he chanted, “What’s the color of shit? BROWN!” until my tears turned to hilarity.

He had my back. The moment before I walked down the aisle at my wedding, he said, “We have to go now, but I’m happy to escort you in either direction.” He loved my husband-to-be and considered us a great match, but he meant it. If I had doubts, he wouldn’t get caught up in the costs of the wedding or what people would think. I pointed toward the pulpit and he winked at me. “Solid choice,” he said.

Until that moment, he’d always pushed me forward—not in any one particular direction, but toward wherever my passion swelled.

The night I told him about my plan to write a novel, I was nervous. I had a successful career, a happy marriage, and no background in creative writing. It sounded insane. Given the unlikely reality of breaking into the publishing industry, I padded my ego by saying I didn’t expect to ever get published. “Then don’t bother writing it,” he said. I was stunned to silence—no small feat for someone with the nickname Talks-A-Lot. Until that moment, he’d always pushed me forward—not in any one particular direction, but toward wherever my passion swelled. “What?” he said. “If you have no expectation of success, it’s a waste of time. You need to have your own back.” I agreed with his point, but what I thought was: No, I don’t. I have you for that.

On September 23, 2008, my 53-year-old father died in his sleep of a catastrophic heart attack. I had a four-month-old baby and I was pregnant, and he was—poof—gone. Life without him flattened me. It took effort to get up for my daughter, unborn son, and husband. It took effort to go to work, to smile and nod, and to pretend I was okay when nothing was okay. I didn’t write, not even in a journal, for three years. I’d already proven myself in high tech, so when I lost my biggest fan, my cheerleader, I hid there.

One day, a friend said, “I’d take 29 years with your dad over a lifetime with mine.” An understanding surged inside me. My dad gave me everything I needed to live a bold and fulfilling life; allowing mourning to overtake that was an affront to his faith in me.

It was time to look for a solution. To stop being the mouse. To play hurt.

I began to rise above the fog and haze of grief. I uncovered new clarity. I started hearing my dad again, allowing his wisdom to outlast his life. With an understanding of how short a runway we have, and with his spirit nettling me to buck up, I resigned from a lucrative job I was good at but didn’t enjoy to pursue my dream of becoming an author. That decision changed the course of my life and brought me to a haunting but freeing conclusion. You can learn from life’s most agonizing moments, but it’s at the expense of whatever you lost. It will never be worth it, so you have to learn to accept the injustice.

This Father’s Day, like every Father’s Day, I’ll take time to remember my dad. I will drink a Maker’s Mark on ice and eat a candy bar I’ve chilled in the fridge as the sun sets, paying homage to the man who molded me into a doer and a risk-taker, who encouraged me to disregard society’s priorities and expectations in favor of my own. I will be grateful for this opportunity to honor him by doing something he did regularly. But there will be tears.

Damn, I miss that man.

Abby Fabiaschi is a human rights advocate and co-founder of Empower Her Network, a nonprofit that paves a path for survivors of human trafficking with a will for independence. In 2012, Abby resigned from her executive post in high tech to pursue a career in writing. I Liked My Life is her first novel. She and her family divide their time between West Hartford, Connecticut, and Park City, Utah.