“Our pain links us to one another, inspiring compassion and reminding us that we are never alone.” 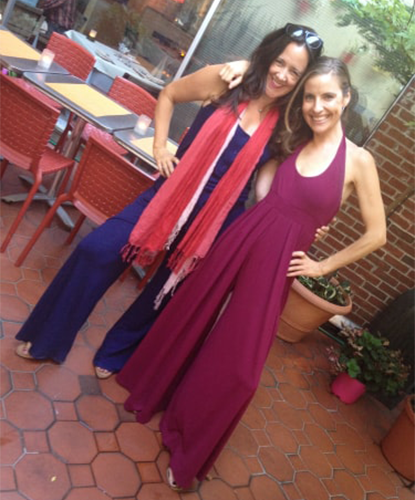 In the summer of 2015, I sat with my cousins Karen and John, contemplating how we would mark our upcoming 40th birthdays. We were born just months apart, and Karen’s 4-0 was first. To mark the milestone, she decided to produce a cancer benefit.

Karen’s idea of giving back was inspiring—and prescient. One week after she turned 40, she was diagnosed with advanced-stage colon cancer. The news hit like an earthquake. She and her husband, Todd, had two small children. In the following weeks, planning the benefit seemed to be a lifeline for Karen, allowing her to pour her energy into something constructive.

As she settled into her new normal, I settled on my birthday project: I’d produce and perform a short movement film on empathy, celebrating the healing power of human connection. The idea had been in my head for a few years.

It was time to take action.

This creative project was also the perfect outlet for my angst. Karen and I had gone through every age and stage together. When her cancer became official, one of my first thoughts was, “But you’re the one person I thought would always be there.”

I bawled through her benefit, which was a smashing success. Immediately after, she started staging pop culture-themed photo shoots in the chemotherapy infusion room. In looking at these pictures, Karen’s self-expression evoked in me both joy (a reflection of her spirit) and devastation (a reflection of the circumstances).

One year after her diagnosis, I finally shot the empathy film, in which I collected stories of grief and sorrow from strangers and then danced through the heart of the pain I felt in each. For the second half of the shoot, Karen’s eight-year-old daughter and some of her friends came to dance, representing rebirth and celebration. As Khalil Gibran wrote, “Your joy is your sorrow unmasked.”

By the time I turned 41 in February 2017, the film had stalled in the editing phase. Meanwhile, Karen’s condition was slowly turning. On my birthday, she told me a friend had offered to help her die. This was her way of asking if I would be there. I reassured her: “I’ll be there.”

The following weeks were chaotic, stressful, agonizing, and exhausting, but we also had grace, laughter, mysticism, and love.

One month later, she entered the hospital, the beginning of the end of her life. The following weeks were chaotic, stressful, agonizing, and exhausting, but we also had grace, laughter, mysticism, and love. As a matter of practicality, I kept my grief dormant, but sometimes it erupted.

In May 2017, two days before Karen went into the hospital for the last time, she was home in bed, Todd massaging her feet, while I sat next to her. Karen was so fragile that it took both of us to look after her. Hardly able to speak, she lifted a finger and slowly moved it toward her iPad, landing on Prince’s “1999,” of all songs.

Life is just a party and parties weren’t meant to last.

On the occasion of leaving this world, Karen wanted a dance party. So Todd started dancing, and I did too, leaning back so that she couldn’t see the tears streaming down my face.

One month after she died, I got word that I needed a new editor for the empathy film. Just one problem: I couldn’t get off my couch. Some days, it took six hours for my brain fog to clear. There was no way I could finish a film.

But in August, feeling better, I stumbled across the site of the perfect filmmaker, who offered to take the empathy piece on as a passion project, on the condition that we reshoot it.

My still-raw grief acted as a portal, allowing me visceral engagement with the universal experience of suffering.

The reshoot was a repeat of the year before—moving through other people’s pain—only now, loss colored every wall in my existential house. My still-raw grief acted as a portal, allowing me visceral engagement with the universal experience of suffering. Though circumstances may be vastly different, our pain links us to one another, inspiring compassion and reminding us that we are never alone.

For the second half of the shoot, Todd brought their two children. Jen, a longtime friend of Karen’s, brought her four daughters. They came directly from the memorial mass of Jen’s son, who had died two years earlier at the age of nine months. Dancing together was a gift.

People asked me later if the experience was cathartic. It wasn’t. Catharsis required more physical and emotional stamina than I had to give. Plus, catharsis implies a finish line. There, that’s done.

Yet, in doing this project, the grief had a container; pain expressed creatively ushered me into a world of absolute connection, where the story contributors’ breathtaking resiliency buoyed me and Karen’s presence was deeply felt.

As we twirled and laughed that day, I remembered Karen wanting to party like it was 1999, clinging fiercely to celebration in the midst of goodbye. That was amazing—and instructive.

Though the film began with the intention of giving back, I can't help but think, “Thank you, thank you, for all that I have received.”

Suzanne Guillette is a writer and artist. In 2017, she produced and created Moving, for You: A Tribute to Empathy in collaboration with filmmaker Austin Wideman. As well, she recently published Battle Dress: What I Wore to Confront My Past (Kindle Single, 2017), a long-form essay about reckoning with decades-old sexual violence.