“Of the lessons Anita taught me, the greatest one was how to exit gracefully, on your own terms.” 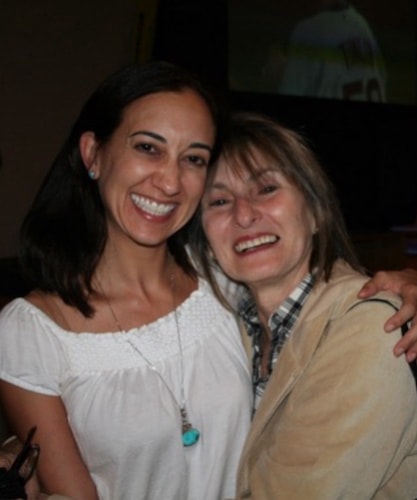 The email was titled 'Not so good news.'

It was from Ken, her husband, and it said that a couple weeks before, Anita was having shortness of breath. They initially thought it was pneumonia. Further tests revealed it was actually lung cancer, and it had already spread to her liver and bones.

There was no cure, and Anita was unwilling to undergo chemo or radiation. She felt privileged to have experienced life through the lens of an artist and to have produced a body of work she was proud of. She felt grateful for her wonderful marriage and her friendships.

She was not afraid of dying, but she was unwilling to suffer.

When I moved to New York after college in my early 20s, certain that I wanted to write for a living but having no idea how to do that, someone put me in touch with Anita, an artist who was always looking for interns. I figured I had to embrace every opportunity and left her a message. She interviewed me on the phone, and in her husky voice, told me to go to an address on Second and Second. I climbed the stairs to her freezing, enormous, rent-controlled loft in January of 1993. It was filled with canvases, drop cloths, and editing machines. There she was—a tiny woman of formidable presence.

Anita put me to work assisting her on a short film. I don't recall the exact details of what she was trying to create, but it involved moving images of sparkle on a slide projector—a half a millimeter this way, then that way, then back again. I understood obsession with details with words, but I wasn't connected to this task and I felt trapped, realizing that I'd have to feign interest for months. I guess my face must have been a bit like Anne Hathaway's in the cerulean blue scene with Miranda Priestley. And like Miranda, Anita turned to me and said, 'You think this is stupid.'

I tried to make excuses, but under Anita's gaze, there was no use. 'I'm a writer,' I said helplessly. 'I don't know why I took this internship; I just want to write.' But instead of lashing out at me or dressing me down for not connecting with her art, she simply said, 'Okay. Let's get you writing.'

Anita was such a prolific creator, she was overflowing with ideas and needed a writer to put them down on paper. This was something I could help her with—and I did. It was the beginning of a 25-year mentorship.

She made avant-garde cinema, as well as light installations, paintings, sculptures, photography, and prints. Her work has been in the Met, the Getty, the Hirshhorn, and museums all over the world. Even though I was striving to write for television—something so very different from her own work, something that didn’t have the respect it does now—she treated me as her artistic equal. Anita made me take myself seriously.

She was my touchstone and my guide.

She was my touchstone and my guide. How could she be gone, so suddenly?

To feel connected to her, I began to read through every email she had ever sent me, hundreds of them. They were a collection of half-baked ideas she wanted me to write, descriptions of people she had met on the subway, and photos of peaches and cherry blossom trees and fat babies on swings and break dancers in museums.

I also found a note she wrote me after going to physical therapy.

There is a ballet of movement here. People floating by on wheeled stools, strange walks across the room, others lurching forward on push supports. It is fabulous! Improbable and wonderful.

Most people endure physical therapy. They're bored. Irritated. Scrolling through their phones. Anita was looking at the world. Her eye and her imagination simply never stopped. It is easy to see why I worshipped her.

And yet, among all of the lessons Anita taught me, the greatest one was how to exit gracefully, on your own terms.

Her illness was lightning fast. So fast that I never got to see her again. By the time she was diagnosed, she was too exhausted for visitors. I said I would fly out in a heartbeat, but Anita wanted to die without fanfare, in her loft, in Ken's arms, surrounded by her art. And she did.

It has almost been a year, and I am still in shock. I was going through my kids' rooms last week, clearing them out before school started, and I came across a picture book Anita had bought them. I burst into tears. My kids looked terrified, but I reassured them that it's okay that I feel sad. I'm glad that book sparked my memory of her. It reminded me to reach out to Ken the next day.

I am in awe of Ken. He works tirelessly to get her work seen and recognized posthumously. He has gone back to work, to exercise, to art openings by their friends, and to their beloved house in Shelter Island. But he is quiet when he needs to be and social when he needs company.

In grief, Ken has become my new role model.

How do I cope? There is one thing that has made me feel better, and it is this. If I am sitting at physical therapy or a dentist appointment or in traffic and I remember to look at the world around me—if I manage to see a ballet somewhere unexpected or I notice how the sunlight hits the ground in the morning; if I remember to delight in peaches and cherry blossom trees and fat babies on swings and videos of break dancers—then Anita isn't entirely gone. She is still alive a bit, in me.

Lizzy Weiss is the showrunner of Sorry For Your Loss, which was selected as one of only two U.S. series to receive a world premiere at the 2018 Toronto International Film Festival. She was the creator of the Peabody-award winning drama Switched at Birth and wrote the surf girl film Blue Crush. She lives in Los Angeles with her husband and two children.