“On love and loss, but mostly on love” 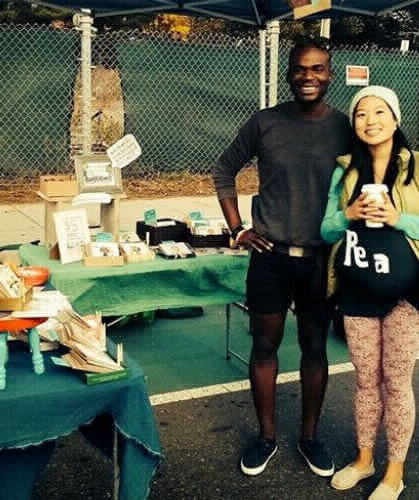 People say that 50 percent of a greeting card collection should be birthday cards. I have about three times as many cards for grief and loss as I do for birthdays. I guess it's because I feel like I have a lot more to say on the subject. Or maybe it's precisely because I don't know what to say, because I am still in the depths of figuring it out for myself, and maybe by putting pieces of my own grief down on so many cards to send out into the world, my hope is that it will finally disperse or somehow transform into something I can make a better peace with.

Three years ago, Nap, my partner at the time, passed away. I'm not sure why I feel the need to write and share this—maybe it's because even though grieving the death of a loved one is one of the most universal experiences, I personally have found it to be profoundly isolating. Maybe I just want someone—or many someones—to bear witness. Maybe if we all talked about it a bit more—all of the sad, tired, bizarre, terrible, bittersweet, and strangely hilarious parts, and all the bits in between—it might be less lonely for anyone going through it. I think it's also because it makes me sad that the world seemed to just move right along when he died. Even I am undeniably, thankfully, confusingly, inevitably moving forward in my life. I am comforted by the idea of Nap being kept in people's thoughts, even if it's only for a minute by whomever stumbles across this.

Even though grieving the death of a loved one is one of the most universal experiences, I personally have found it to be profoundly isolating.

We were 28 when Nap died. It never crossed my mind that even if we didn't stay together, there was a chance he wouldn't always be around somewhere, somewhere I could text and he would eventually text back. After he died, I kept thinking that I just wanted to catch a glimpse of him at the grocery store, so I would know that he was okay. I just wanted to know that he was still around in the world, because he made it a better place, made my tiny patch of planet so much more fun and vibrant.

Nap was undeniably special. He was the first person I dated who never made me feel like I should be any different than I was, partly because he was so comfortable living outside of the "shoulds" himself. If you ever saw a bald black man wearing tight cutoffs, no shirt, customized gardening gloves, and a bright yellow helmet bombing it down the middle of Mass Ave on a longboard during rush hour, that was Nap. My heart still skips a beat whenever I catch a fleeting flash of yellow on a busy street.

When we were dating, my weekends were full of to-dos that didn't seem particularly important but were still obligatory—do laundry, clean the kitchen, stop by the bank, buy paper towels, answer emails, and so on. Relegating uninterrupted, guiltless fun mostly to Saturday and Sunday nights did not seem ideal, but it was reasonable enough. Then I met Nap, whose weekends consisted of a whole lot of nothing except for the same two standing obligations: playing bass at the Blues Jam at Johnny D's on Saturday afternoons, followed by the Blues Jam at the Cantab Lounge on Sunday nights, or as he called them, his "day church" and "night church." And maybe going out dancing on Saturday night. And Sunday night.

I'm still struck by how much of his time he gave me, and that he gave it so freely and happily. It was such a gift.

All that to say, Nap spent time and energy doing what made him feel most alive—and for the most part, disregarded the rest. I think those who knew him would agree that he lived—and danced—exuberantly. And yet, the times that I will always remember and miss the most are the quieter ones. The ones watching murder-mystery marathons, playing chess, working from home together on Fridays, wandering around Ace Hardware looking for some bit or bob, listening to live music over cheap bourbon, lying around in the backyard and drinking afternoon beers on the porch. I'm still struck by how much of his time he gave me, and that he gave it so freely and happily. It was such a gift.

One of the many complicated things that happens when someone you're really close to dies is that they don't automatically become perfect; the ways in which they’ve frustrated or hurt you don't disappear even if people stop talking about their faults. Sometimes they can feel worse because your half-fought fights and open issues remain painfully unresolved. When I talked to my therapist, trying to make sense of our relationship and his death at the same time, at some point she said simply, "He loved you as well as he could." The more I think about it, the more I think that is what matters most in all of this—not that we love neatly or perfectly, but that we love as well as our deeply flawed, earnest, eager, selfish, insecure, and broken-and-stitched-together hearts can. It is the most we can give to or ask of each other.

And despite the deep sadness and pain and my internal catalog of unanswerable questions, I know this: I have been well loved.

I always say that I feel like I’ve become a different person since Nap died, in often contradicting ways that I haven't been able to articulate and in ways that I imagine will keep changing. I think that I am quicker to anger and quicker to well up with tears. I am also quicker to laugh, and much more willing to drop the "shoulds" in order to spend time doing nothing in particular with someone I love. I now know in the most intimate and devastating way how true the cliche "life is short" can be. To me, it isn't an invitation to be reckless, but to be open. Open to love and other feelings, to fresh experiences and hard conversations. So many of the things that scare me—rejection, heartbreak, failure, ridicule, instability—now pale in comparison to my desire to squeeze out every bit of time and joy and contentment available while I can.

Much to my own astonishment, I fell in love again. I am still surprised at my ability to love as deeply as I do, maybe even more fiercely than I was able or willing to before. I thought that I had forever lost the will and capacity to be with anyone ever again, but apparently the universe is unknowable in all the ways, and our capacity for healing and hope runs deep.

I don't know how things will turn out, but in the meantime, my plan is just to go on loving as best I can.

I think Nap would be proud of me. He was such a light, and I miss him.