“The biggest lesson I’ve learned thus far is to wake up each day and show up and be present.” 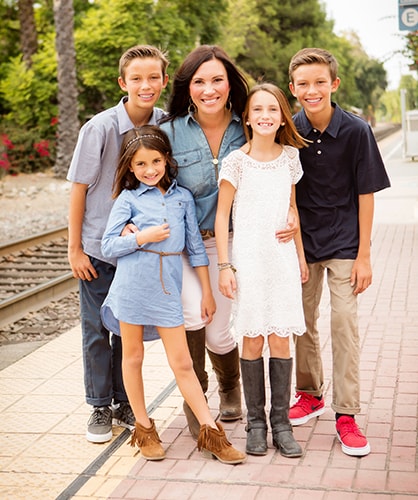 I met Bryce when I was twenty-two and in my last semester of college.

We fell madly in love and spent our early twenties traveling around the world, working hard, and just enjoying being young. We got married when I was twenty-seven and he was thirty and started having kids three years later. We have four children together: twins Cole and Will (fourteen), Tess (ten), and Brynn (seven). I’d say that we had as perfect a life and marriage as you could have, given the stresses of managing two jobs, four kids, and lots of obligations and schedules. I would sometimes lie awake at night looking at Bryce while he slept and think, “How did I get so lucky to have this life full of love, fun, family, and happiness?” I never took how happy we were for granted. Never.

For my fortieth birthday in 2012 we planned a fun-filled vacation with the kids and two other families. We had the opportunity to stay at a truly incredible resort in Cabo San Lucas—we were on the vacation of a lifetime and it all felt like a dream.

I never took how happy we were for granted. Never.

Everything changed in an instant. The second day of the trip, Bryce complained that his stomach was bothering him. We thought it was just Montezuma’s revenge from all the margaritas we had been drinking, but when Bryce woke up the next morning, he collapsed naked on the bathroom floor, his body writhing in abdominal pain, and he had to be rushed to the hospital. The doctor thought he might have ruptured his appendix and would need surgery.

We were very anxious at the thought of Bryce having surgery in Mexico and were trying to catch a flight back to the States, but he was feeling worse with each passing moment. We had a few friends back in California who were doctors, and we reached out for their opinion. They all said that it would be okay; in the worst-case scenario he would have an unnecessary surgery, but that the procedure was pretty standard. The doctor at Hospital de Especialidades went in for what turned out to be an eight-hour surgery. He discovered that Bryce had asymptomatic diverticulitis, which had ruptured, causing sepsis and peritonitis. The doctor had to remove ten inches of his colon.

The days following the surgery were pretty rough, and we were not out of the woods, but Bryce was super healthy and fit and was making a remarkable recovery. At this point our friends had gone back to California with the kids and Bryce’s dad had flown to Cabo to help me navigate the doctors and the complexities of health insurance and receiving medical care outside of the United States.

On the third morning, I went back to the hospital a little later than usual because it was raining. When I walked into the room, I was surprised to see that all of the medical equipment had been removed and replaced with a couch and chairs. It actually looked a little bit cheery, much different from the previous days, when Bryce had been hooked up to all kinds of monitors.

On that morning Bryce had showered, eaten a real meal, walked, and was joking around. It was the first time since this ordeal had begun that he started to seem like the fun-loving happy man I knew. He said he was feeling great, like a lion.

Not ten minutes later, he was complaining that he couldn’t breathe. At first Bryce’s dad and I thought his anxiety was coming back because of the intensity of the previous days. But he urgently told us to get the doctors—something was wrong. All of a sudden lots of doctors rushed into the room, pushed us aside, and started to work on him. In no time Bryce was being placed on a gurney, with multiple hospital staff surrounding him. They were rolling him into surgery.

It was all happening in slow motion and I was barely able to process the moment.

Bryce had them stop for a moment; he reached out his hand, looked into my eyes, and told me how much he loved me. It was all happening in slow motion and I was barely able to process the moment. Was this really happening? Didn’t I see this scene before in a movie? These were the thoughts swirling in my mind. That was the last time Bryce spoke to me. That was it. That was the end of our life together.

Bryce William Halbert died on the operating table of a pulmonary embolism on August 15, 2012, in Cabo San Lucas, Mexico. We started the trip feeling on top of the world, like life couldn’t get any better. I left on an airplane back to California, alone. We had been together for eighteen years.

The first year after Bryce’s death was a complete blur. I think I was in shock for twelve months. I went back to my job as a program manager at Apple but ultimately resigned because I was flying back and forth to Cupertino a lot and around the country. That wasn’t really working now that I was a single mom with four kids.

Fast-forward to today. I certainly don’t have any answers about life or death at this point, but I have learned and grown a lot over the past four years. I am a better, deeper, stronger, and more loving and empathetic person than I ever was before. We think we’re those things early on, but it’s not until something really big or, in my case, really devastating happens that we can ever truly know what those qualities mean.

When I was younger, I had a clear picture of what I wanted my life to look like, but life had a very different idea. Today I wake up each morning with the intention of being the best mom I can be and truly and deeply appreciating my life and making the most of it.

I have learned that grief is not a straight path. For all of the days that I wake up happy, optimistic, and empowered, there are still those days that knock me down, those days when I remember all of the love and life Bryce and I shared, those days when I don’t feel like I can possibly handle all the responsibilities in front of me. I certainly have no answers other than every day is different, with some being exceptionally beautiful, some being mundane, and others being overwhelmingly sad.

Today I wake up each morning with the intention of being the best mom I can be and truly and deeply appreciating my life and making the most of it.

I think the biggest lesson I’ve learned thus far is to wake up each day and show up and be present, not only for my children and my community, but for myself as well. And if there are those days that I just can’t do it ... that’s okay too.