“In grief, there’s no need for answers.” 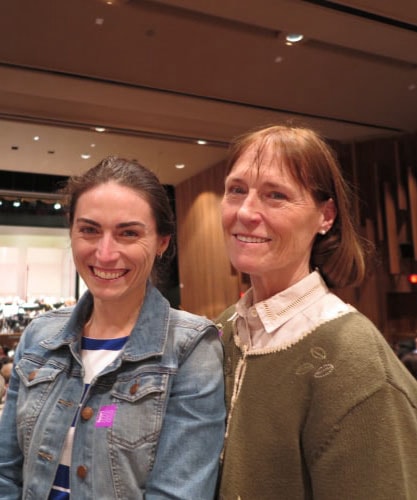 In lieu of a late-morning coffee run, a coworker stopped by my office.

I was crying at my desk.

“It’s fine. I’m fine. Nothing bad happened. Everything’s fine!” I blurted out, wiping my eyes. “My best friend is having a baby girl,” I said, the image of the ultrasound still open on my cell phone. “I just found out.”

“That’s great,” my coworker said, a note of relief in his voice.

What I said was true, but it wasn’t why I was crying.

“I know, it’s great,” I replied. She’d been worried for years about infertility and warned by doctors that, due to health issues, conception might not be possible. To me, this baby was a miracle, a lifelong dream for someone I’ve known since we were twelve and love like family. “And … it’s also my mother’s birthday today,” I added hesitantly.

“I see,” he said, nodding and understanding. Having written and spoken very publicly about my mother’s suicide in late 2015, no further explanation was needed. “Is this always a hard day for you?”

I nodded my head, more a gesture of appreciation than affirmation. I wasn’t crying about my mother’s birthday either. I couldn’t yet articulate to myself the why behind my crying, let alone to a coworker over coffee. The nod would have to suffice. Then we did what any two civilized people do when caught in an awkward moment: pretended it never happened and went back to work like it was any other Wednesday, which for me it most obviously wasn’t.

For the rest of the day I held myself together. It was fine. I spoke to friends and family who called to check in on me. I was fine. After work I visited my favorite bookstore, which is called the Last Bookstore and also happens to be the last bookstore I visited before my mom died. Nothing bad happened there. My boyfriend and I ate tacos for dinner. Everything was fine. And yet I couldn’t shake the words I’d heard earlier:

“Is this always a hard day for you?”

What was the answer? I could speculate based on some universally acknowledged trend in human responses to loss and mourning, but that would only be a prediction. In the wake of my mother’s death, her birthday is still foreign territory, but in thirty years, the day will make up a significant part of my emotional landscape, a place that doesn’t always make logical sense.

Speaking of things that don’t make sense … I did eventually determine—or more accurately, admit to—why I was crying at my desk when I learned on my dead mom’s birthday that one of my BFFs was having a baby girl.

I was crying because my mother would never get to meet the child my friend was carrying. It was my mother who always said she knew my best friend—her “surrogate daughter” as she liked to say—would have a girl of her own one day despite those doctors’ predictions. I was crying because I had a palpable sensation that my mother somehow orchestrated the entire moment from the great beyond. I cried because when I saw the image of this tiny, unborn child on my cell phone screen, I felt the vastness of my mother’s spirit inhabiting the room.

My mom was very good at getting her way, but this was really pushing it.

Was that hard? Sad? Happy? Yes.

It was all of those. It was the mysterious poetry of grief.

“Grief” is such a small word for such big feeling. Like light, it’s right on top of you and then it’s far away, half matter and half motion, an unexpected particle that represents the whole of someone’s absence and a sudden wave of memory crashing down and washing itself away.

The etymology of the word “grief” can be traced back to the Latin word gravis. In Latin, the word means “heavy, important, and fateful.” The word also means “pregnant.”

I think about the day this baby will be born. There will be tears. I’ll be crying in the waiting room. The baby will probably cry as she enters the world outside the womb, to her a foreign land. And giving birth my best friend will cry too, as mothers cry experiencing one of life’s greatest physical pains and one of its deepest wells of joy. It’s just a prediction, but I think this is the exact location, inside this emotion, where my mother’s memory has taken up permanent residence.

As I make my way toward Mother’s Day, I’ll be grateful for my grief, for the time I had with my mother in life, as well as the time I have with her in death. In grief, there’s no need for answers.

There’s no need to explain why I found myself in the Last Bookstore two days before my mother’s death, not knowing I would never see her again. Why, of the thousands of books for sale there, I bought a rare first edition of poems by Edna St. Vincent Millay called Fatal Interview. And days later, when my mother was gone to wherever she is now, I opened the book to its dedication page and read these words:

When I think of you,

In my throat, bereft

No sound is left,

To make a word of grief.

A version of this article was first published on www.TheMighty.com