“I would find myself living a life with the unexplainable pain of an amputated heart.” 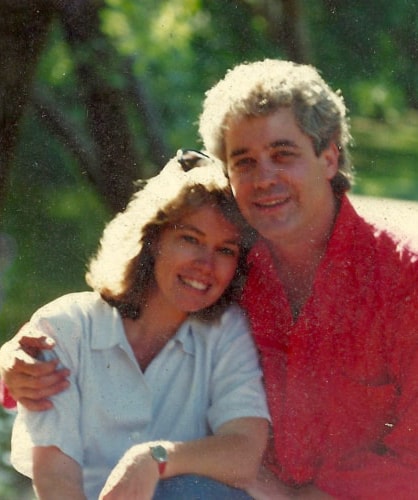 It was a beautiful spring day in March. My husband Patrick had gone to the doctor the day before, complaining of a stomachache. He was given an EKG with no sign of anything wrong with his heart. The doctor thought it might be a gallbladder problem and scheduled additional tests for the following week. I remember looking at Patrick that morning and thinking that his lips seemed more pale than usual. When I voiced my concern, he said that nothing was wrong and that he probably just needed a better night’s sleep. I had to take our two-year-old daughter Meghan to her playgroup, so Patrick took our six-year-old son Ben and nine-year-old daughter Caitlin to school on his way to work. It was the last time we would ever see him alive.

Around 3:00 p.m., I spoke with him and he still had the stomachache. I remember telling him, “Maybe you need to stop adding hot sauce to everything you eat.” He decided to lie down and rest a bit. Two hours later, I received a call from the paramedics. Patrick had collapsed in the lobby of his office building from a heart attack and they were trying to revive him. Did he have any history of heart disease? I wanted to drop everything and race to him, but I didn’t have a mobile phone back then and the rescue team needed to speak with me, they wanted help contacting his doctor, and the kids were due to arrive home from their afterschool activities at any minute. I got the doctor on the phone with the paramedic, and then someone on the rescue team got on the phone with me and said, “I’m sorry, we weren’t able to resuscitate him.” “What do you mean? What does the word ‘resuscitate’ mean?” I yelled. “It means he is dead,” they said.” “He can’t be, we have a two-year-old! People with two-year-olds don’t die!” I screamed.

I don’t think I would have been able to survive without the love and support of family and friends.

In the moment that I heard Patrick had died, our older two children walked into the house from school. If there is anything I wish I could take back, it is the fact that they heard my involuntary wail of grief and I didn’t have the opportunity to break the news to them gently. All I remember is Ben wailing, “But what about baseball?” Patrick had been a little league regional baseball champion in his youth and he and Ben had spent hours oiling Ben’s mitt, getting ready for the opening of baseball season the next week. From that moment forward, I would find myself living a life with the unexplainable pain of an amputated heart.

And then finally one day you wake up and you have learned to cope.

I don’t think I would have been able to survive without the love and support of family and friends. I remember that my girlfriend Rita created a calendar and someone brought dinner to the house every night for a month. I was in shock and all I could think of was my children’s well-being. I couldn’t listen to the news, and had a hard time following conversations, but I do remember playing the score from “The Lion King” over and over. The physical experience of death is the opposite of birth. You experience an unspeakable contraction of pain, but then you find that you can go five minutes without crying, then ten minutes, and then a day, a week, a month. And then finally one day you wake up and you have learned to cope. Someone said that just because your loved one has died, it doesn’t mean your relationship has died. I needed to hear that, because I didn’t want my relationship with Patrick to die. In fact, it did continue to develop in a new way. I learned to find joy in all things again, and I am so very grateful for having had his love. Sheryl is right—you always want Option A, but the absolute best thing you can do is embrace Option B.