“There will never be a day, a memory, or a moment as revered as picking March flowers in February with my dad.” 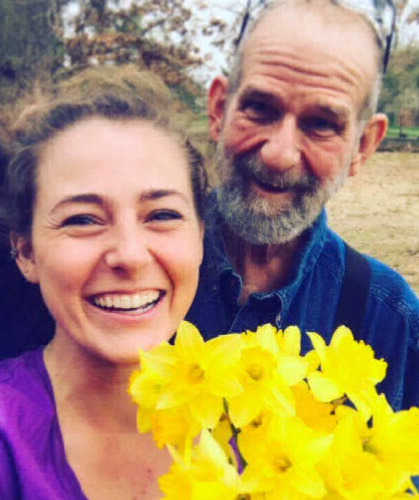 I sat in a neurologist’s office with my mom and dad the spring before medical school, finally consulting about my dad’s progressive dysphagia, increasingly incoherent speech, and muscle weakness. My mother bragged, as mothers do, to the resident and physician that I would be starting medical school in a few short months. My dad beamed and gave me a knowing wink. We exchanged pleasantries, and after the neurologist examined my dad, he asked me for my thoughts on my dad’s symptoms. I was hesitant to speak—the only thing I had researched that made sense was the one thing I was desperately praying for him not to have. After I gave a noncommittal response to his question, the neurologist looked to my dad and said three letters in sequence that changed our lives.

“We think you have ALS.”

My world was shattered. I briefly heard murmurs about diseases that can mimic ALS and how there was no true confirmatory test for ALS. The truest test would be the progression. My dad sat calmly, as always, but he knew the gravity those three letters carried. My mom was attentive and hopeful. I was just trying to hold it together before leaving the room.

I had driven to the hospital alone, so afterwards I told my parents I would meet them at home. In the hospital lobby, I stopped for a second to look around me. People streamed by in the hustle and bustle of an urban hospital. Among the smiles and the coffee dates, the patients in wheelchairs and the hurrying staff, I wondered if I was the only one who felt that shattered at that moment. I bought a cup of coffee and drove the three hours home with a stream of tears I could not manage to stop.

Over the next few days, I tried to prepare my mom. I knew that she either did not know the severity of the diagnosis or was in denial. I had to be very candid with her about the way our lives would change over the next few years. I explained that my dad’s dysphagia would get worse, to the point where we would no longer be able to understand him, and progress to him being unable to swallow foods or liquids. I explained that his muscles would weaken, and eventually he would need a wheelchair, then a bed. I explained to her that it would not only be the muscles of his frame that would weaken, but the muscles that help us breathe, as well. I explained to her that the cause of death in almost all patients with ALS is respiratory failure. I held her hand, and her only response was,“We will wait and see.”

We didn’t speak a lot, but we didn’t have to.

My dad was already my best friend prior to his diagnosis, but I spent nearly every second with him that summer. A brilliant woodworker, he helped me build furniture for my new apartment—some shelves, a coffee table, and a clothing rack. We even refurnished one of his mother’s old polyester chairs for my room. We didn’t speak a lot, but we didn’t have to. The one thing he made clear was that I was still going to medical school. He told me nothing would put this dream on hold.

The day before my White Coat Ceremony was the day my dad received his definitive diagnosis of ALS. I was in Louisville for orientation week, and my parents met up with me that morning. It was such an exciting day, but I was in a fog of sorrow and heartache. My dad brought with him the coffee table we had made—designed by him, sanded and stained by me, a labor of love. It was made out of two-by-fours, so we hauled it in pieces up to the third floor of my Old Louisville apartment. The last load was the first time I saw the manifestations of his muscle weakness. He tripped up the stairs near the top of the third floor, weak from exhaustion. I knew things would never be the same.

I had a parallel back home that no other student had, a dad whose body did not follow the rules we learned.

I spent my first semester of medical school learning anatomy. I learned every muscle in the body, traced nerves, followed arteries, solidified movements and functions. Meanwhile, I had a parallel back home that no other student had, a dad whose body did not follow the rules we learned. After our musculoskeletal unit, I was able to make it back home to see my dad. I witnessed how the muscles I learned could atrophy, and saw firsthand how anatomy goes awry in disease. I learned the cranial nerves in school, and over Christmas break, I watched as his facial nerve no longer summoned the smile I have loved all my life. Each time I went home, his disease had progressed. I was missing so many “lasts” by being at school.

It was not easy sacrificing time with my dad to be in medical school. This time is already considered a difficult period in a physician’s life, and I had the added stress of balancing a full class schedule and a dad with a terminal disease. I tried to channel the very raw emotions I felt to connect and learn from patients and families who were experiencing the manifestations of illnesses and disease. I was overcome with emotion during a panel our class had with a family affected by Huntington’s disease. I explained to 160 of my peers, my professors, and the family who just told us their story that my dad had ALS.

Choking back tears, I could finally mumble, “How do you emotionally protect yourself when someone you love so much is degenerating in front of you?”

They all looked at each other, and the oldest sister responded, “Honey, you don’t. You feel what you feel, and you love him through it.”

A strict class-goer (I cannot get the social interaction I need via an online recording), I skipped the day after the Huntington’s panel to drive six hours round trip to spend the day with my dad. We picked March flowers in the middle of February, took silly pictures, and enjoyed an unseasonably warm winter day.

That was my dad: bright beauty blooming when it does not make sense.

By that point, I had spent seven months studying. Between memorizing anatomy and biochemistry and learning how to provide appropriate care to my future patients, there were many days that I sacrificed picking flowers and there were many silly pictures I did not have the chance to take with him. Yet, I had a distinct opportunity and the privilege of foresight to be able to cherish these moments. There will never be a day, a memory, or a moment as revered as picking March flowers in February with my dad.

He quickly declined during the summer. The bulbar onset of his ALS worsened his prognosis, and we all suffered as his respiratory muscles weakened. After a full discussion of the options, he chose to have a tracheostomy performed. I remember his anxiety heading to the hospital before this procedure. I remember the way he looked around slowly prior to leaving our house. I remember the way he held my hand in the car. It’s like he knew he was never coming home. Although the procedure went well, he developed pneumonia and had to be placed on a ventilator, on which he lived thereafter.

A few weeks into my second year of medical school, he voluntarily transferred from our hometown hospital in Paducah to Kindred in Louisville. We both knew he was dying, and he willingly left the comfort of his familiar hospital for a foreign one, in order to live out his last few weeks by my side. My mother was not well at the time, and the trip from Paducah was very difficult for her. I vowed to hold his hand on the good days and bad days, while he gave us the sanctuary of a shaded room, where we were the only people who mattered. I vowed to tell him stories and give him smiles, to be his March flowers on the rainy days, and to hold the umbrella for both of us when the sun just couldn’t quite shine. I vowed to let him rest when he needed it, and to show him that I knew his body would be whole again. I vowed to meet him at our favorite place, the golf course, when the end came.

He had a fight in him that I know lies deep within me somewhere, too.

The week we learned lung physiology in school, I watched as my dad’s lungs failed. Life can be poetic that way. He asked to be taken off of his ventilator, no longer wanting to endure the pain and suffering that is a result of the final stages of ALS. I sat by his side every day for eight days after he was taken off his life support. He had a fight in him that I know lies deep within me somewhere, too. I held his hand as he took his final breath, kissed his forehead, and told him I would see him again one day.

I don’t think it’s fair to qualify all of these as sacrifices—we commit to this path for a reason, and we know that we are giving up time with the people we love. I was able to use my new medical knowledge and research interpretation to help my mom understand my dad’s disease. I was able to talk with his physicians and surgeons to make sure he was getting the best possible care. Ultimately, I was able to understand his decision in the end to be taken off his ventilator and go peacefully. My time studying, while limiting the amount of time I had to spend with my dad, made each moment with him precious. What we sacrifice fuels us to be better physicians. I had a dad who was not selfish with my dreams, even though I had to be.

One day, when I am able to make a difference in my patients’ lives, I will have my dad and his unexplainable fortitude and selflessness to thank.

Some of the last words my dad was able to write were: “Because of the challenges I face, I am less than half the man I used to be on the outside, but more than twice the man on the inside.” Each day, I am grateful for the chance that I was given to be a physician and heal patients, and each day, I am thankful for the chance I have to strive to be a little more like him.

This story was originally published by the Greater Louisville Medical Society. You can read the original story here.