“I remember what it is like to feel as if I am drowning. But I also realize that I am capable of kicking back to the surface.” 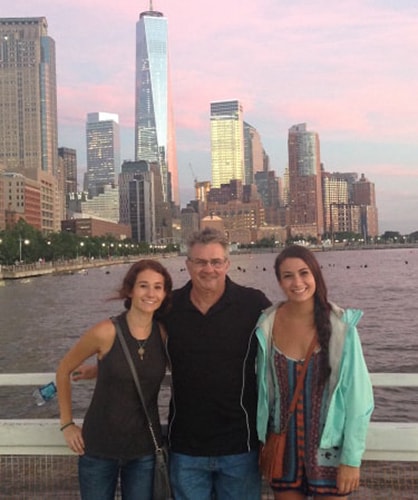 It was the day after Christmas. My mother, sister, and I went to the local mall, still giddy with excitement from the holiday. I vividly remember standing in Williams Sonoma when my mom’s phone rang—our home was on fire.

When we got back to our neighborhood, I saw multiple fire trucks, police cars, a news truck, and bystanders watching the action. I can still recall my dad’s glasses, covered in black soot, when I embraced him at the scene.

The day ended. The fire was extinguished. I still had my family, but our home was gone. Those beloved Christmas gifts were now ashes. Even as a seven-year-old, I realized that our lives—and my family—would never be the same.

I remember a woman, attempting to comfort me, saying, “Do not worry. Nothing this bad will happen to you again. This was it for you.” Boy, was she wrong.

The year spent rebuilding my house was full of hardships but also wonderful memories: spending two weeks at a hotel (with a waffle maker); the outpouring of support from our community; and the realization of the importance of forgiveness. The fire was caused by our neighbors’ garbage pail. Hot ashes from their fireplace reignited and hit my father’s car, eventually spreading to our house. My parents encouraged us to think of how much guilt the family felt and how painful that was for them.

The fire was the first time I experienced true adversity. I remember a woman, attempting to comfort me, saying, “Do not worry. Nothing this bad will happen to you again. This was it for you.” Boy, was she wrong.

My parents ultimately divorced and we moved to Connecticut. I saw my father grieve the loss of his father and three siblings; I saw him lose his job on Wall Street in 2008; I saw the deep pain and shame he felt at being unemployed.

Ten years later: my first week at UCLA had ended. It was incredible. I felt a new sense of freedom. I was not worried about my dad or my family; I was simply living my life. It was 6:30 a.m. when my phone rang—it was my mother. She delivered the news that my dad had died suddenly from a massive heart attack. Time stood still. I shrieked. And cried. And cried. I felt as if I was suffocating.

My dad was getting his wish to be closer to his children. But then he died. How could the universe be so cruel?

Losing a parent is always tragic. However, the timing of my father’s death felt especially awful. My dad, who studied Mandarin at UCLA, was proud that I was there. My brother was moving in with him that night. My sister had just begun her internship in finance, something that had formed a new bond between them. My dad was getting his wish to be closer to his children. But then he died. How could the universe be so cruel?

The week of the funeral was hell. I witnessed my siblings cry in a way that I never thought possible.

I saw my grandmother bury her fourth child. I saw family grieve the loss of their brother. I saw my mom struggle with the strange emotions from the loss of a past love, the father of her children, and someone she shared years of memories with.

Sadness. Anger. Depression. I experienced all those emotions. However, I vividly remember my confusion and surprise upon returning to UCLA, when I suddenly felt like a social pariah. I had acquired a status that no one wants. I was a member of the dead parents club.

To cope with the new emotions, I decided I was going to become an expert at grieving (a thought that is now laughable). I gauged my chances at being “normal” by reading studies of individuals who lost a parent suddenly, and I found a strange sense of comfort in the data. Those studies were there telling me that I was actually going to be okay. The statistics debunked my new feelings of social anxiety—I was not alone.

I spent weeks in Los Angeles experiencing feelings of anger that were new to me. I remember being on a run, my mind churning with the classic “Why me, why my family?” thoughts. I stopped midrun and cried, and I prayed to God that one day I would stop feeling so angry at the world and myself.

I recognize that the fire—and other hardships—cultivated the resilience that enabled me to overcome the loss of my dad.

I never knew how to explain my initial feelings after my dad’s death until a post by Sheryl Sandberg appeared in my Facebook feed. The post was raw and outlined the grief stemming from the loss of her husband, Dave. “My god, this woman gets it!” I thought.

Looking back on this time remains painful. However, I recognize that the fire—and other hardships—cultivated the resilience that enabled me to overcome the loss of my dad. Now these memories do not simply invoke sadness or fear. Rather, they provide me with a sense of relief. I remember what it is like to feel as if I am drowning. But I also realize that I am capable of kicking back to the surface. I know that I can learn to breathe again.