"Having survived a tragedy, I now understand how to support others." 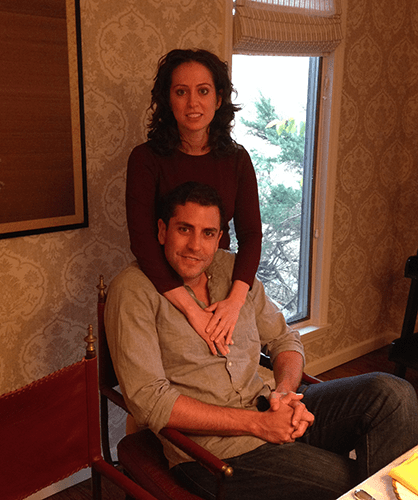 I was born with two parents: one who cared for me but didn’t love me unconditionally, and one who couldn’t care for me but loved me unconditionally. My father couldn’t care for me because around the time of my birth he was diagnosed with bipolar disorder, a mental illness where a person experiences extreme highs and extreme lows. This diagnosis made life a struggle for my dad. It was often hard for him to manage the day-to-day tasks of taking care of himself, earning a living, and providing for his loved ones. I saw my dad every other weekend after my parents divorced when I was three, less frequently following his hospitalizations for depression during my elementary school years, and less and less frequently during boarding school, college, and adulthood, when my career took me from Boston to Los Angeles and San Francisco.

Despite the daily challenges my father faced, he never complained and I never questioned his love and devotion. He sent thoughtful handwritten cards for every birthday, holiday, and for no reason at all. He always showed a genuine interest in what I was learning and playing, and he supported my passions and interests. Knowing I was a big fan of Juliana Hatfield, my dad took me to my first “all ages” show in seventh grade at the Avalon in Boston and secured backstage passes so I could meet Juliana and Jeff Buckley. Thanks to my dad, I was the coolest preteen in my grade.

When I turned thirty I found myself faced with the challenge of having to care for my aging father, who was struggling physically and mentally during the East Coast winter. When I was vacationing in Italy with my brother, Todd, and mother, Dad slipped, fell on the ice, and broke his ankle. My dad didn’t own a car or have a credit card, so when I returned to the States, I had to wake up three hours early twice a week to call a taxi to take him from his apartment to Massachusetts General for physical therapy and order groceries for him so both he and I didn’t have to worry about his food intake. A few months later, after not hearing from my father for a week and growing concerned, I called the Boston police and had them do a wellness check on my dad. I learned that he had fallen again on the street in downtown Boston, lost consciousness, had been in the hospital for a week as a John Doe, and was lucky to be alive. It was clear that my father, who could never take care of us, could no longer take care of himself.

I was scared for my dad and myself. What did my brother and I know about taking care of an adult child?

Soon after this accident, my brother and I made the lifesaving decision to move our dad from Boston to San Francisco to be close to us. My seventy-eight-year-old uncle put my dad (his baby brother ten years younger than he was) on the plane to San Francisco with a box of medication and duffel bag. When my dad got off the plane, it was immediately obvious to us that he was overmedicated, as he was experiencing a considerable amount of confusion and memory loss. He thought my brother was his nephew, Jeremy, and that my brother’s apartment in San Francisco was Jeremy and Wendy’s house in Bedford, New York. My dad woke up in the middle of that first night and announced he had to work on a case—he was a lawyer by profession but hadn’t practiced in more than two decades. I was scared for my dad and myself. What did my brother and I know about taking care of an adult child? I was working full-time, starting graduate school, and beginning to get more serious with my significant other. Todd was working long hours starting a company and traveling frequently for work.

My dad lived with my brother for a month and then he moved in with me the second month, while we got him the care he needed. I used my contacts at Stanford to access and find the best medical care: I chose a geriatric internist, a geriatric psychiatrist, and a physical therapist. An amazing social worker from Jewish Family and Children’s Services helped us find an apartment for my dad equidistant between my brother and me. I spent my summer vacation taking my dad to doctor’s appointments, to the DMV, and to shop for his new apartment. I was taking care of a parent who was never able to take care of me and helping him with all of the activities I had always wished he could help me with growing up, at times resenting him for being unable to be like other people’s dads.

I worried about him like a parent worries about her child. Would he make friends? Would he remember to eat, change his clothes, and shower?

When he was deemed healthy enough to live on his own again by his psychiatrist and social worker, he moved into a beautiful apartment for low-income seniors. His Social Security checks covered most of the rent and Todd made up the difference. I spent the first few nights with him to make sure he would be okay in his new environment. Over the course of the week, I separated from him, spending less and less time in his apartment and building. I worried about him like a parent worries about her child. Would he make friends? Would he remember to eat, change his clothes, and shower? Over time, I became less and less worried and more confident that his condition was under control and he was independent and content. After all, isn’t that what parents want for their child, to send them off on their own into the world?

And then one Wednesday night, shortly after getting home from graduate school, I got a phone call from my brother. “Elizabeth, are you sitting down? Is Mark with you? I have something to tell you. Dad was killed. I don’t know if it was a hit-and-run. You need to call the police. I’m in Las Vegas …”

Over the next few days, we learned that my father had been walking home—just a few blocks from his apartment—when he was hit and killed by someone in an SUV turning left. We later learned that the driver had experienced brain trauma years earlier and had no vision in his left eye. This information only made me feel worse. I was physically ill for months trying to process how unfair life was: that my dad, who was born with an illness that made life so hard for him, could die so tragically. This was the first time in quite a while where things had been going well for him. In the year that my dad lived in San Francisco, I spent more time with him than I had in my entire life. We had family dinners, watched Red Sox and Patriots games together, attended movie screenings, and took a trip back east for Thanksgiving. That had been our first time on an airplane together! My dad was in the best shape of his life and each day was becoming happier and healthier. As my dear friend Allison Kluger told me, I had the best of my dad, but it just wasn’t for long enough. We were just getting to know each other when I was suddenly forced to say good-bye. I was deprived of having a father for most of my life, and then when I finally had one, he was cheated of the life he deserved to live.

It suddenly became clear that happiness is a choice, and I decided I was going to make myself feel good for a moment every day for the rest of my life.

In addition to feeling sick, I also felt tremendous guilt. I was the one who had insisted he move from Boston to California. For an entire year, I cried every day on my drive to work. With the help of a compassionate and patient grief counselor I came to realize it could have happened anywhere and it was what it was—an accident. One day I saw my father in my dreams and he told me that he knew what it was like to feel depressed, and the last thing he would want is for me to be sad for the rest of my life. He knew this was no way to live. It suddenly became clear that happiness is a choice, and I decided I was going to make myself feel good for a moment every day for the rest of my life.

A few years ago, my uncle said my dad always worried about us after he and my mother got divorced. I realized the best gift I can give my father and myself is to live a good life. To me that means doing work that matters, being a caring and committed friend to my family and peers, and not doing something because I am supposed to, but because I want to. My grief counselor taught me there are no shoulds in life.

Every year my dad’s yahrzeit falls on Passover, an important Jewish holiday where we celebrate escaping slavery from Egypt. My dad had a strong Jewish identity, and since we lost him, the Jewish holidays mean more to me. When I host them, I leave a seat for Elijah (the prophet) and my dad, and I eat lots of chocolate-covered raspberry jellies—his favorite candy. Another way I honor and stay connected to him is by doing mitzvahs, or good deeds. I visited a ninety-year-old Holocaust survivor named Rosalie for two years. I also deliver gift bags to seniors with my brother for the Jewish holidays and visit friends, students, and their parents whenever they are in the hospital.

Having survived a tragedy, I now understand how to support others. I know how important it is to reach out to someone during a crisis and continue to stay connected with them long after the crisis or loss. Recently, parents at my school lost their three-year-old son to leukemia. The mother, knowing about my experience with tragedy and grief, asked me how long it took me to “get over” my loss.

I shared with her that you never “get over” it; instead, you learn how to cope.