Giving back to survivors of natural disasters 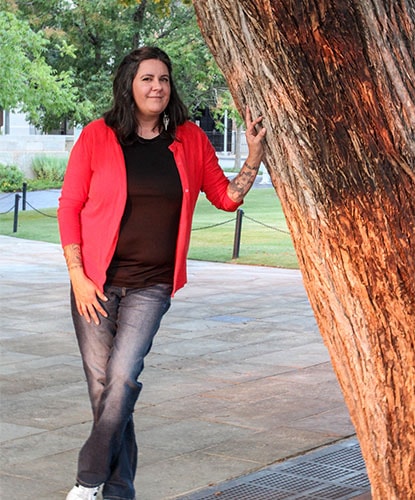 I gave birth to my son, Dutch, two weeks before the landfall of Hurricane Katrina.

I knew the storm was coming and had planned for it, but it was not enough. My husband, my son, and I had to evacuate a few days later. The choice was difficult, because we couldn’t take animals to shelters. But we needed to get to one, for Dutch. We were forced to leave behind our three dogs—and our home.

We got up to Philadelphia, Mississippi, where some of my family was. I had packed three days’ worth of clothes and supplies—that’s how long I was expecting to be gone. Never did I imagine this storm would be so widespread, or cause such devastation.

The time in Mississippi was difficult. Dutch got sick, and my husband and I began having problems with our marriage. Even seemingly simple things—like accessing my money—were difficult. But I was lucky to encounter moments of kindness, like when the bank let me open an account for a penny so I could set up FEMA assistance. I also relied on my sister for support. She was always willing to talk with me about my experience.

It was hard to accept that something about who I was felt out of place after the storm.

After the storm, I had a long journey of recovery. I would walk down the dog aisle at Walmart and become physically sick. I went to therapy, which was difficult in itself. It was hard to accept that something about who I was felt out of place after the storm.

Eventually, I ended up working with Habitat for Humanity in Oklahoma. The support from the people of Oklahoma and this organization has helped me in my healing process. For the longest time, I was terrified of where I lived in Oklahoma—they call my area “Tornado Alley.” But people here are used to natural disasters. They helped me learn to stop being terrified of the weather and instead to start making a plan and trust it.

Through volunteering, I’ve been able to give back to people who understand what I went through. I’ve talked to survivors of major storms, and I organized a pen pal program among Hurricane Katrina survivors.

I wanted to create a connective force between disaster victims.

People who survive disasters, whether they are physically put in harm's way or mentally affected, learn that these experiences can flood their whole life. At first, it was so hard for me to see people who had survived. But now I know firsthand what it feels like. Today I’m able to give back and connect with others who have endured a similar experience. Being able to talk about the pain is so important—because I’ve gotten through, I hope to show others it’s possible for them to do the same. Healing is possible.

In memory of my mother Shelia Lynn and for the countless brave volunteers that lifted us up.