“I have a newfound appreciation for the little things I took for granted because Avery has to work twice as hard to do them.” 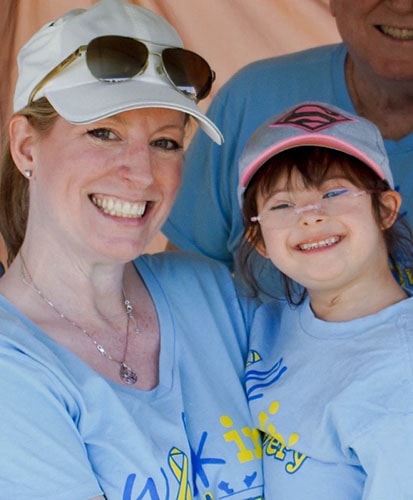 My daughter Avery has Down syndrome. She had heart surgery at just two months old. She was supposed to be out in ten days, but the surgeon made some mistakes. She ended up spending four months on a ventilator before we could take her home.

Because she was so small, they couldn’t find a breathing mask that would fit properly. The nurses, my husband, and I would take turns holding the mask to her face. One nurse held it improperly. The mask pushed up into her nostrils rather than over her mouth. It was suffocating her.

I will never forget that day. I made a huge scene in the ICU. I was angry with the surgeon who made the mistake. I was angry with the nurse. I kept thinking, “They are supposed to be fixing her.” People tried to be there for me during this time, but the only thing that was really going to make me feel better was bringing her home.

When Avery was finally released from the hospital, she needed care 24/7. I was working and had planned to go back to school after she was born. But everything had to change to meet her needs. It ended up being a financial adjustment. And an emotional one.

How could we look to the future?

Looking to the future was difficult. We were spending every ounce of energy and money just getting through each day. How could we look to the future?

We were lucky to have people to lean on. My parents offered us support in all forms. They never questioned any decision we made about how to care for Avery. We wouldn’t have made it through that difficult time without them.

I was able to focus on forward motion once I let go of the anger and distrust I developed at the hospital. Today, Avery is the one who keeps me strong. She’s such a great kid. Through her, I’ve learned to appreciate the mundane and everyday tasks. I have a newfound appreciation for the little things I took for granted because Avery has to work twice as hard to do them.