“I stay motivated for my kids, because now I need to be their mother and their father.” 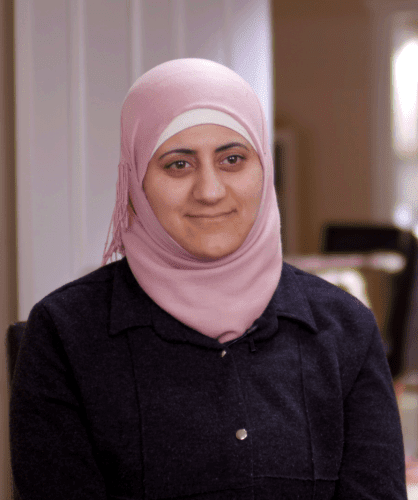 During the Syrian civil war, my husband was arrested on his way home from work. I never saw him again. His name was published in a list of the dead. Around the same time, my oldest son, Akram, was killed outside our home. I saw him fall. For months, I wished that I’d died instead of him. He was only sixteen and hadn’t seen anything of life. He was such a good boy.

At the time Akram died, I was eight months pregnant. A few weeks later, my baby was stillborn. She died during the delivery.

We lived under siege for two years. Our street was heavily bombed. All the windows of our apartment were broken. We were tear-gassed often. The town was attacked with chemical weapons and little children suffocated.

My youngest children, Adham and Rawaa, got sick with jaundice. There was no fresh food. Rawaa would cry because she wanted a sandwich, and I couldn’t give it to her. They were so afraid when they heard bombings near us. They’d hold me and scream, “Mom, Mom!”

We lived under siege for two years. Our street was heavily bombed. All the windows of our apartment were broken. We were tear-gassed often.

In May 2015, I fled to Turkey with Adham and Rawaa. I had to leave my three older children behind. My oldest daughter, Lina, already had her own family. After I left, her son was shot and died in her arms. My son Hamza came to Turkey a year and a half after us. My middle daughter, Rama, is still in Syria with her grandmother. When we talk on the phone, I tell her, “I want to bring you here soon.”

It was such a relief to get to Istanbul. My brother Mouhammad is here too. But initially, my children were still very traumatized. Adham would run to me and grab me whenever he heard a plane. He’d say, “Mom, the plane is here, it’ll bomb us now.” He was terrified.

At first, I was lonely. But then I found a wonderful community at Small Projects Istanbul. It changed my life. I used to take the kids and they would do activities with other kids while I worked with other women to make handcrafts. I know everyone there and visit friends from the center often.

I faced new challenges after Adham had a serious accident last summer. He fell out of the second-floor window of our apartment. He’s had six surgeries to keep the swelling in his brain down, and he'll need more in the future. I spend all of my time caring for him. He’s now five, and he can't speak well and isn't potty-trained. He is unable to get the care he needs in Turkey. I’m considering moving to Germany, where another one of my brothers lives, but getting a visa there is nearly impossible for Syrians. The UNHCR is backlogged with relocation requests from refugees.

In the meantime, I love to cook and to see my kids and brother happily eating. If I could, I’d spend all my time in the kitchen. I make Syrian dishes. They are delicious and remind us of home.

If I were the only person to suffer like this—my husband gone, my son and grandson killed—I would go crazy. But I know that my pain is no worse than that of other Syrians. Some Syrian mothers have lost all of their children.

After all of this, I can still smile and laugh. I stay motivated for my kids, because now I need to be their mother and their father. I need to make up for the hard life we lived in Syria.

My dream is to see my kids happy, successful, and educated. What we’ve lost is gone and won’t come back, but I hope we will live better days in the future.