“I wasn’t afraid of my pain anymore, and that newfound courage permeated every facet of my life.” 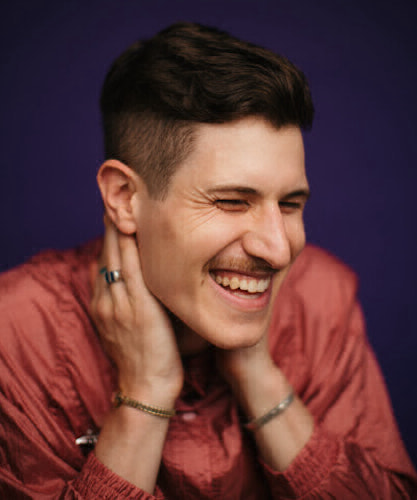 At the beginning of 2015, I thought I was never going to be able to play music again. I’d worked my whole life to make it my career and now I could hardly sing or play a note.

I was a medical mystery. X-rays, MRIs, and ultrasounds all came back normal. I went to specialist after specialist. By then, I hadn’t been able to play guitar for two years or sing for months because of chronic pain in my throat and arms.

"I felt like my body was rebelling against me, preventing me from making music and starting my career, with no end in sight."

I had made it my mission to find a cure. I was given countless shaky diagnoses and tried everything from hypnotherapy to immunoglobulin plasma infusions, but nothing helped. I felt like my body was rebelling against me, preventing me from making music and starting my career, with no end in sight. Music was the only way I knew how to truly express myself, so I couldn’t even fully communicate what I was feeling to the people around me.

I found a variety of ways to deal with my pain, some healthy and some not so healthy. I had to distract myself at all costs, because any moment my mind wandered ultimately led to feelings of despair and thoughts about how I was missing out on everything and falling behind my peers as their careers blossomed. I spent as much time as I could with other people to occupy my mind. When I was alone, I had to have some sort of media to distract me. Podcasts and television were the only things stimulating enough to fill the void. When things were at their worst, I’d turn to alcohol. No medication could numb my pain or anxiety nearly as well as a beer or liquor.

After another two years, having run through all the best doctors in New York City, my mom suggested I look into the Mayo Clinic in Minnesota. I went there in May 2017 and finally got a concrete diagnosis: Central Sensitization Syndrome.

"I met so many people, all with different manifestations of pain, but we all understood what each person had gone through to end up there."

When I finally got my diagnosis, I learned that what I really needed was to challenge my psychology around my pain and my thought patterns in general. This was the only way to make permanent changes to my symptoms. I enrolled in the Mayo Clinic’s Pain Rehab program and spent three-and-a-half weeks in Minnesota. The program was grueling—eight hours a day with all types of therapy. I met so many people, all with different manifestations of pain, but we all understood what each person had gone through to end up there.

At first, it was hard for me to open up to people. I didn’t understand what I was going through, so how could I explain it to others and expect their understanding? With such a bizarre condition, I didn’t know where to turn for commiseration. However, I found that listening to other people’s struggles, no matter how dissimilar they were from my own, was extremely cathartic and gave me much needed perspective. I dove into the archives of true storytelling shows like The Moth and RISK!, among many others. This made me feel less alone.

I also occupied my time and distracted myself by engaging in as much learning as I could. I was a sponge for history, politics, science, and any other interesting information I could get my hands on. Filling my brain with as much newness as I could made me feel less stagnant. Perhaps more importantly, I found joy in the people around me. I strengthened some key friendships while also working to be as friendly and optimistic as I could with any strangers I encountered.

As I progressed through the rehab program, I trained myself to change the way I approached my pain—not as something to run from, but something to work through, slowly rewiring my brain. In order to do this, I had to confront the activities that were scariest to me. I had to play music again, no matter how physically uncomfortable it was. I had to sing and play guitar through my symptoms, instead of stopping to avoid them. Using cognitive behavioral therapy and mindfulness strategies, along with a precise and gradual increase in activity, I was able to reduce my pain.

As difficult as it was, the slow increase in activity gave me so much pride.

I would have a small celebration every time I’d play or sing for 10 minutes, up to 30 minutes; a month later, I was able to go for an hour. I would call my parents to tell them the good news. After all those years, I was finally calling to tell them how triumphant I was feeling, instead of giving an update on my latest struggle. Some days were easier or less symptomatic than others. It was totally unpredictable, but regardless, the accomplishment felt just as sweet.

I even felt comfortable enough to sing at my graduation from the program. I wasn’t afraid of my pain anymore, and that newfound courage permeated every facet of my life, from dating and songwriting to the outward presentation of my queer identity. Though music once again serves as my main source of joy, the passions I cultivated during my period of recovery remain very important parts of my life and my fulfillment. Now, when my symptoms occasionally come back, I don’t see them as the end of my career or the end of my life. They are merely sensations like any other benign feeling in the body, so I don’t have to be scared of them. And now, two years later, I’m finally releasing new music and starting the career I’ve always dreamed of.