“My greatest joy now is just being able to wake up in the morning. On August 5, 2012, I wasn't so sure that would happen.” 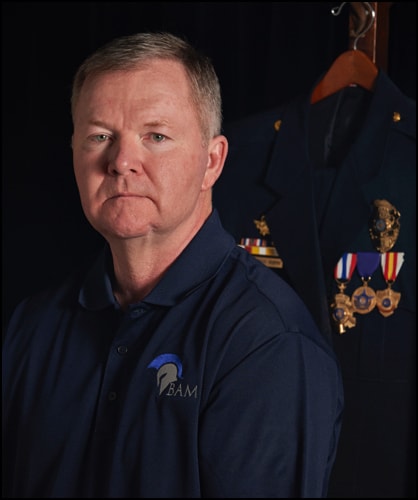 I’ve been shot more times than any police officer in history. On August 5, 2012, I was the first officer on the scene at the Sikh temple massacre in Oak Creek, Wisconsin. The first bullet ripped through my throat and destroyed my voice box. I was shot another fourteen times at close range.

While the shooter was firing at me, I didn’t really feel the pain. I was just angry. I didn’t want to give him the satisfaction of seeing my fear or weakness. I thought about my family. I wasn’t going to let him take me from them.

The aftermath was rough, and not just because of the physical pain. The hardest part was accepting that I wouldn’t be the same person. I’d be disabled. Every part of my body was affected. I came home from the hospital with both hands in casts, a feeding tube in my stomach, and a trachea tube to breathe. My doctor said I’d probably never be able to talk again.

What helped me cope? My entire family’s support and love. I don’t normally like accepting people’s help. But I learned to count on others and ask for help when I needed it.

My wife is my best friend. She helped me heal psychologically as well as physically. At first, we were so afraid of stressing each other out that we didn’t communicate fully. But that was counterproductive.

By accident, we had a breakthrough. My wife and I met the nephew of the temple president who was killed in the shooting. The nephew is a doctor and he’s training to be a psychologist. We spent forty-five minutes talking. When he left, my wife and I looked at each other and said, “Did we just get a therapy session?” He got us to talk. A weight was lifted from our marriage. We could heal better and faster.

I thought about my family. I wasn’t going to let him take me from them

In hindsight, I wish I’d gotten therapy for the entire family. But I didn’t even get it for myself. I’m too stubborn. I didn’t have issues with sleeping or eating, so I thought I was okay. But my family was affected as much as I was, if not more so.

I now lead a program to help other officers who have survived gunshot wounds. I say, “Tell your story to as many people as will listen. It’s cathartic. Holding it in is the worst thing you can do.” And I’ll emphasize that their family needs to heal just as much as the officers do.

My greatest joy now is just being able to wake up in the morning. On August 5, 2012, I wasn't so sure that would happen.

Retired Lt. Brian Murphy began his career in the United States Marine Corp in 1980. He served on embassy duty in Kabul, Afghanistan and Bangkok, Thailand. On August 5, 2012, Lt. Murphy was the first officer on the scene of the Sikh temple shooting that left six dead and three injured. He sustained 15 gun shots during the gunfight. He has received numerous awards, including the Congressional Badge of Bravery and the Public Safety Medal of Valor.