"I remain committed to defining my own future rather than allowing it to be" defined for me. 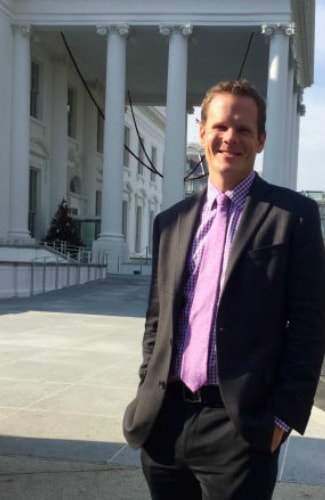 I am a person in long-term recovery. What that means to me is that I have not found it necessary to use any type of mood-altering substance in over eight years. Recovery has allowed me to show up for my family, friends, and community in a positive way and to form true relationships.

Growing up, I had advantages and challenges. My grandfather was an attorney, my grandmother was a retired nurse, and both provided love and support. My mother was a strong and loving influence on me and provided us with opportunities to travel and immerse in different cultures. My mom was also a single mother and I never developed a lasting relationship with my father. To my knowledge, he remains actively in the grip of addiction and other mental health conditions. I had a stepfather who I grew close with and our relationship continued even after he and my mother separated. During my senior year of high school, I held my grandfather as he died from cancer, a friend of mine was murdered, and my stepdad, a commercial fisherman, was lost at sea. We believe a tanker struck his boat and did not report it.

Addiction runs in my family and I was no exception. I had already developed a significant substance use disorder by my early teenage years and the trauma of these deaths exacerbated my condition substantially. My addiction progressed and I experienced periods of homelessness and hospitalizations. I sold drugs to survive and to sustain my use.

Addiction runs in my family and I was no exception

At age twenty-four, I entered treatment and immediately stopped selling drugs. I got a job at a call center and began living a life in recovery. Several months later, I was indicted on five federal felony charges related to my conduct during my active addiction. I ultimately plead guilty to drug charges and began a thirty-three month sentence in federal prison.

I have wanted to practice law since I was a child. My grandfather’s work and service initially inspired me. During my incarceration, I witnessed and experienced injustices that made me determined to practice law. My passion was rekindled. For the first time, due to my recovery and newfound willingness to work hard and follow direction, my dream began to transform into a vision and a plan. It felt delusional at times to think that I could someday attend law school, as I contemplated and planned my future while sitting in federal prison.

I was often filled with doubt.

I explained to another inmate that there was no way I could make it through law school without prescribed amphetamines, which I grew up on but had subsequently stopped using. This man was frustrated with me. He told me I was talking myself out of my own vision. The man shared with me a story of a friend of his, a blind man, who became the first person to make it through law school and the bar exam using Braille. He told me I needed to just (expletive) do it rather than try to convince myself why I couldn’t. His bluntness stung at first but I listened and followed his advice.

I stayed sober through my incarceration, remained focused on service and personal growth, and returned to my community. I ultimately graduated from college and law school with honors, served our country at the White House, passed the bar and ethics exams, and now serve as executive director of Life of Purpose at the University of North Texas, a treatment center focused on helping young people whose educations have been interrupted by addiction.

My journey has not been without challenges. The biggest barrier I have faced in my recovery has been the stigma and discrimination that perpetually follows people with criminal records and people with a history of addiction. An example of this discrimination is that despite my accomplishments and the fact that I held national security position clearance with the federal government, I have trouble even securing housing because of policies that ban “felons” from renting. In some states I would even be denied the fundamental right to vote.

One way I have worked through these challenges has been by never disqualifying myself from an opportunity because I’m afraid someone else will. I do not believe in contempt prior to investigation. People told me that my goals were impossible. I smiled, thanked them for their concern, and kept moving forward. I refuse to define myself with harmful labels such as “felon, ex-addict, or former junkie” and I refuse to adopt the position in life that society intends for me based on my past.

I am a human being and a person in long-term recovery and I remain committed to defining my own future rather than allowing it to be defined for me. I am also in no way unique or even particularly talented. I simply made a decision to ask for and accept help, follow direction, and not give up, no matter what does or does not happen in my life.

Even in recovery and with the beautiful life I have, I am not always happy. I don’t think we humans are supposed to be. But I often do have some degree of peace, which eluded me both in my late childhood and during my active addiction. Before I found recovery, I didn’t know how to sit in my own skin, fully embrace life’s highs and lows, or truly feel emotions. I constantly sought to numb or enhance these experiences. The growth I have experienced so far has often been uncomfortable, sometimes even painful. But I have found peace through this process and plan to continue on this path.