“Planting a garden of any sort symbolizes hope. Hope in tomorrow. Hope that something beautiful is about to happen.” 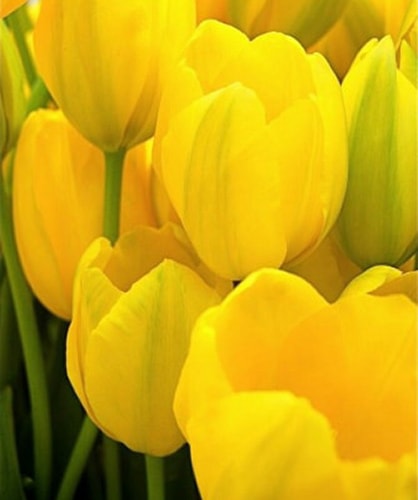 It’s no secret that I love flowers. They make me smile and literally seem to lift my soul.

There was a time in my life when flowers were forbidden. I was a victim of domestic violence, and an abuser will seek to remove as much joy from his victim’s life as possible. But with that life behind me, as a thriving survivor who is reinventing myself, I have flowers in my life every single day.

If I don’t have a fresh bouquet on my dining table, I have my paintings of flowers, my Julie’s Bloomies magnetic flower pins (oh, how they make me happy!), and I make sure I see flowers everywhere. I’m not good at gardening, though. I guess that I never conquered that experience, and thinking about it now, consequences of my PTSD re-enter my thoughts.

I did make an attempt a few years ago to plant tulips in my new post-divorce home. It wasn’t easy, trying to fight the old messages playing in my head saying that I didn’t deserve to be happy. It was a beautiful day for planting one hundred tulip bulbs from Amsterdam. Not knowing much about planting, it took me from eight in the morning until six that night, with only a quickie break for lunch. I was so excited! The entire driveway would be lined in gorgeous yellow tulips—like a roadway to rejoicing.

I did not see one hundred tulips sprout into being. Not all of them became flowers. Some did. Some didn’t.

So, I waited. And I waited. Weeks passed, and finally I saw little spurts of greenery budding forth, erect as if to say “Heneini”—Here I am! I can’t begin to describe my excitement. And then I waited some more.

Though I did not count as I planted, the invoice stated that there were one hundred bulbs. However, I did not see one hundred tulips sprout into being. Not all of them became flowers. Some did. Some didn’t.

When I planted them, I assumed all were going to be splashes of sunny yellow against the deep green lawn. I envisioned my own journey, a life of change and growth, as I awaited the rewards of my efforts. I checked to see if animals had dug up some bulbs. Didn’t seem so. Still I waited.

Finally, I contacted the seller overseas, who told me that not all bulbs bloom. This upset me, because I paid for one hundred tulips! And her answer was, “You just never know.”

Oh, did that response take me to a different place. This tulip experience reconnected me to what I already knew—that you just never know.

Planting a garden of any sort symbolizes hope. Hope in tomorrow. Hope that something beautiful is about to happen. But you don’t know which plants will survive, which seeds will be strong enough to withstand the environment and flourish. You don’t know which bulbs will be survivors.

I’m a survivor. And the phone call to Amsterdam reminded me of how you never know so many things. As a voice for the voiceless, I must put my knowledge of domestic violence into the mix here. Because you just never know …

The next time you're in a room with six people, think about this:

• One in four women experiences violence from a partner in her lifetime.

• One in three teens experiences sexual or physical abuse or threats from a boyfriend/girlfriend in one year.

• One in six women is a survivor of sexual assault.

• One in five men has experienced some form of sexual victimization in his life.

• One in four women and one in six men were sexually abused before the age of eighteen.

Once you know, you can never say you didn't.